The origins of Red Deer’s beautiful Cenotaph date back to the end of WWI.  The statue of the Unknown Soldier is a provincial historic site.  In this article, historian and author Michael Dawe helps us understand the rich history of this monument and reminds us all of the sacrifices of our forebearers.  Enjoy the photo gallery showing the changes to the Cenotaph and its surroundings over the years.

There are many memorials around the City of Red Deer to honour those who served and those who lost their lives during a time of war. The main community memorial is the Cenotaph, the statue of the Unknown Soldier that stands in the centre of Ross Street in the heart of downtown Red Deer.

Honour Guard at the unveiling of the Cenotaph, September 15, 1922, Red Deer Archives P2700

The origins of the Cenotaph go back to the end of the First World War. That conflict had been a searing experience for Red Deer. 850 young men and women from the City and surrounding districts had enlisted. Of these, 118 lost their lives. Of those who returned, many had suffered terrible wounds and faced a lifetime of ill health and suffering.  Hence, it was extremely important to the community that a fitting and very special memorial be created.

On December 18, 1918, five weeks after the end of the War, the Central Alberta local of the Great War Veterans Association (forerunner of the Royal Canadian Legion) organized a large public meeting to discuss the creation of such a memorial.  Three proposals were initially made. The first was to construct a pyramidal monument of river cobblestones in the centre of the City. The second was to construct a community hall and recreation facility next to City Hall. The third was to purchase the old Alexandra (Park) Hotel and turn it into a community centre.

After considerable discussion, a fourth proposal was adopted. It was decided to build a monument rather than a community centre.  However, at the suggestion of Lochlan MacLean, it was also decided that this monument be in the form of a statue of a soldier, mounted on a pedestal, rather than a cobblestone pyramid or obelisk.

Major Frank Norbury, an architectural sculptor at the University of Alberta and a veteran of the War, was commissioned to carve the statue. He came up with the concept of carving the Unknown Soldier as he was coming off active duty on the front line. He was to face west, toward home and peace. He was also to be positioned towards the C.P.R. station from which most of the soldiers had left Red Deer for the War.

This latter point was one of the greatest controversies about the Cenotaph. City Council and a few others wanted it in the centre of the City Square (now City Hall Park). However, the majority wanted it facing directly towards the station and in the middle of Ross Street, Red Deer’s busiest thoroughfare, so that it would be a constant reminder of the sacrifices of the War.

Meanwhile, fundraising for the project commenced, but proved quite a challenge. Post-war Red Deer faced one of the worst economic depressions in its history. However, despite the general shortage of money, by the following summer more than half of the $6200 needed had been raised.  Unfortunately, Red Deer City Council decided that given its financial situation, it could not contribute any money to the project. This decision reinforced the opinion of the Memorial Committee that Council’s wish to have the Cenotaph in the middle of the City Square should be ignored.

There were still a lot of hard feelings about that lack of official City participation. Eventually, City Council agreed to build a boulevard in the middle of Ross Street, west of 49 Avenue, as a site for the Cenotaph. A decision was also made to place street lights at either end of that boulevard to provide nighttime illumination of the spot.

On September 15, 1922, the Cenotaph was officially unveiled. To the delight of the community, Governor General Lord Byng of Vimy agreed to come and do the honours. Lord Byng was a hero of one of Canada’s most significant military victories, the Battle of Vimy Ridge. Vimy was also a victory that had also come with very heavy loss of life, both locally and nationally.

At the time of the official unveiling, it was reported that the Cenotaph was the first sculpture war memorial in Alberta. Once the official dedication was completed, the monument was placed into trust with the City on behalf of those who had contributed to its creation.

The Cenotaph was rededicated in 1949 to include remembrance of those who served and lost their lives in the Second World War. A plaque signifying that designation was added to the pedestal. After the completion of the new City Hall Park and the Memorial Centre in the early 1950’s. there was a push to relocate the Cenotaph from its location on Ross Street to either the centre of City Hall Park or a new site in front of the Memorial Centre. However, a plebiscite was held in 1953 in which the citizens of Red Deer voted to keep the Cenotaph were it was.

Another plaque was added in 1988 in memory of those who served and died in the Korean Conflict. At the same time, through the efforts of some dedicated members of the public, special lighting was added to ensure that the Cenotaph was highly visible at night.

There were new proposals in the 1990’s to relocate the Cenotaph to City Hall Park. However, Charlie Mac Lean, son of Lochlan MacLean and one of the last surviving people to have actually built the Cenotaph, offered the opinion that he did not think that the monument could be safely relocated.

In 2006, the Cenotaph was extensively cleaned and repaired. City Council then successfully applied to have the Cenotaph designated as a Provincial Historic Site. In 2010-2011, a beautiful Veterans’ Park was created around the Cenotaph, to enhance it and to make it more accessible to the public.  Moreover, eight interpretive panels were created to let people know the full significance of Red Deer’s official war memorial. They give the stories of those who served in the Boer War, First World War, Second World War, Korean Conflict, the Afghanistan War and all the peace-keeping and peace-making missions in which Canadians have been involved.

Honour Guard at the unveiling of the Cenotaph, September 15, 1922, Red Deer Archives P2700

Here are some other local history stories you might enjoy

The Battle of Vimy Ridge Described by Michael Dawe

More from this author
Education / 10 hours ago 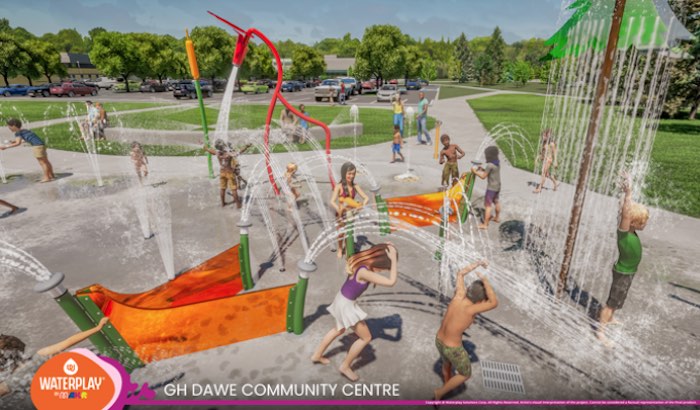 A long time community supporter and local business owner is contributing to three recreation amenities within Red Deer through personal financial contribution. Woody Paylor has graciously donated funds that will see the replacement of a community park and the naming of the new spray park and a current athletic park.

Woody’s contribution will be honoured for years to come with the naming of the new spray park at G.H. Dawe Community Centre, which will be named Woody’s Spray Park; and the track at Lindsay Thurber Comprehensive High School will be named Woody’s Athletic Park. A portion of the contribution will also be used to replace the playground at the Bower-Kin Community Centre.

“Over the years, Woody has supported many community initiatives that lead to enhanced quality of life for Red Deerians. He is passionate about initiatives that enable individuals of all ages and abilities to have opportunities to get outdoors, be active, and build community in a city they call home,” said Mayor
Ken Johnston. “His financial contribution to the three amenities speaks to this and will leave a lasting legacy on our beloved recreation amenities for generations to come.”

Each of the three amenities that will benefit from his generosity have a personal connection to him and his family. The track is where he and his family have spent numerous hours training and supporting annual community events. The Bower-Kin park has provided hours of entertainment to the youth
connected to his family as well as the surrounding neighborhood. The spray park will bring joy to generations for many years to come, as one of the many enhancements occurring at the G.H. Dawe Community Centre.

“Red Deer and Central Alberta have been very kind to my family and supported our business in tremendous ways. I feel privileged to give back to a community we care about. The outdoor trails and parks have been the jewel of our city and my family wants to see that continued,” said Woody Paylor.

“My wife Val and I have spent many hours at community playgrounds, and we are excited to be part of building one together with the Bower Community Association. Our entire family has enjoyed events at the track, and we are thrilled to see this amenity continue to provide a similar experience for others in
the community”.

The City will coordinate the playground replacement. As part of the design process, the neighbourhood will be involved in the playground design through engagement with the Bower-Kin Community Association that will help bring the vision to life. Planning is anticipated to begin over the winter, with construction to take place in the spring and summer of 2023.

The City will be hosting community events for each of these amenities upon completion, where we can celebrate Woody’s legacy in our community.

Woody’s commitment to community spirit, togetherness, and active living, are all exemplified with this generous contribution. The contribution amount and the terms of the agreement will not be publicly disclosed. Although Woody wishes these terms remain confidential, we can share that it is one of the
largest personal contributions made to City recreation spaces.

The G.H. Dawe Community Centre Expansion project is expected to be open in late February 2023, with Woody’s Spray Park opening in the summer of 2023. For more information on the project, visit www.reddeer.ca/daweexpansion. 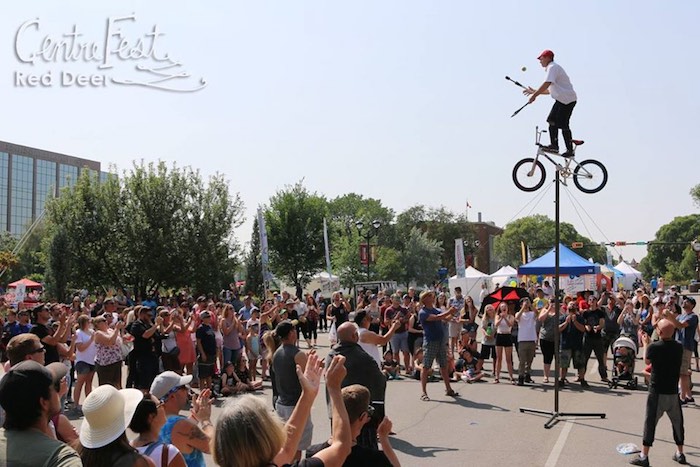 The Culture Development Category provides long term support (up to three years) to service providers to offset operational costs required to deliver culture programs and services within the community. A maximum of $30,000 is available per application, and eligible organizations may submit multiple applications.

“The City is proud to support the variety of events and educational opportunities provided to Red Deerians by these important community organizations,” said Bobby-Jo Stannard, Community Development Superintendent. “From arts, music and children’s theatre to heritage, improv and annual festivals, the vibrancy of Red Deer’s arts scene is evident from this list of not-for-profit groups.”

The following organizations were each awarded three years of funding for the 2023-2025 funding cycle.