“Desperate times call for desperate measures, and now is the time to consider all options, no matter how Machiavellian.” says Dr. Killemall, said the head Epidemiologist for the W.H.O.

In response to this eyebrow-raising official statement, Canadian Prime Minister Justin Trudeau assured all Canadians that the W.H.O. is both infallible, and omniscient, therefore whatever they say, we will obey without question. To further bring home the point, PM Trudeau said yesterday,

“Our Government is now bringing forth new emergency legislation to immediately imprison anyone who makes any statements, either online, or otherwise which contradict, criticize, or question the recommendations of the W.H.O.

This is the type of serious response to the Pandemic that Canadians want, and it’s the response they deserve.  We’re listening, and what’s more, we are taking the appropriate actions necessary for the betterment of all Canadians. We have heard the concerns of many Canadians who are facing financial hardship due to the economic impact of the Covid19 pandemic, and we are required to find a solution so we can get people back to work. Also, we must consider the mental health of Canadians.  Many Canadians have already watched everything worth watching on Netflix, and now are cruelly forced to interact with family members through conversation, board games, and other interactive activities. No Canadian should have to suffer such hardships, so as a response, we have decided to follow the W.H.O. recommendations, and starting next week, we will be Euthanizing all Canadians over the age of 55, who are non-essential. Further, to save on medical costs, and eliminate the further spread of COVID19 we will also Euthanize everyone who tests positive for the virus, and is also deemed to be non-essential. Difficult times call for difficult choices, and I’m confident that Canadians will understand and support their Government.  As fair warning, any protests, complaints, or obstruction of any kind will result in a minimum five-year prison sentence.”

If the parody above doesn’t make you at least a little bit uncomfortable…it should.  Actions far worse than the unthinkable measures in this piece have been done before, with far less provocation.  Six months ago, if someone told you that all Canadians would be confined to their homes for up to eighteen months, would you have believed it?  Or, would you have responded by scoffing, “That’s ridiculous, it could never happen here! Where’s your tinfoil hat?” This is an important question to ask yourself right now.  How far will the Government go? You’ve already been surprised by the current state of affairs, so be prepared for the Government to continue to expand its power by taking away your rights, with or without reasonable cause.

It starts with a well-meaning Police officer issuing an improper ticket to a family for rollerblading together.  The family will likely win in court, but that’s not the point. The point is, a family who is simply spending health time together received an $800.00 fine for an action that did not actually contravene the currently imposed rules of social isolation. If you don’t respond with outrage at this, because it’s not happening to you, then let me remind you of a famous, and sadly relevant quote by the German Lutheran pastor Martin Niemöller.

Many people will be unable to accept that the above sentiment is either appropriate, or relevant to our current situation, and that would be an understandable response.  It’s a bit much for most people to consider that we are now in a perilous position. Nearly every single time for all of recorded human history, when National Governments expand their power, they keep at least some of their new power. Often, the expansion of power continues until the only solution is a violent revolution to topple the tyrannical Government.  You may not be interested in History, but I can assure you, history is directly relevant to your life right now.

Yes, we all need to do our part during the Pandemic, and yes we need to be socially responsible for the good of all.  We must be equally committed to fully regaining our freedoms once this is over, or we will face the very real possibility of living under a dictatorship. 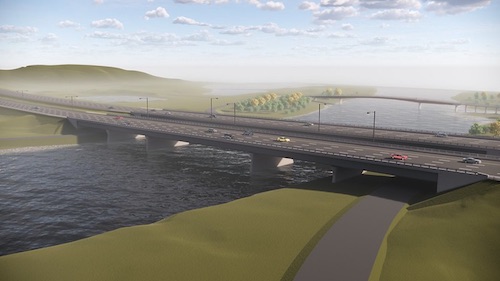 PCL Construction has won the contract to replace the eastbound bridge over the Bow River on southeast Stoney Trail in Calgary.

The contract was awarded for about $48 million and offers significant savings for taxpayers. The total project cost, which includes engineering and utility relocations, is estimated at $60 million – significantly less than the anticipated cost of $70 million.

“With the next step in this strategic project complete, we are creating hundreds of jobs to drive Alberta’s recovery and saving taxpayer dollars at a time of fiscal restraint. Calgarians can look forward to safer and faster rides on an even more complete Calgary Ring Road.”

“New and widened bridges are great news for south Calgary residents who have been waiting for safer ways to get to work and play. Alberta’s government is focused on strategic projects that deliver value and jobs when they’re needed most.”

“PCL is excited to work with Alberta Transportation on this component of the Stoney Trail Calgary Ring Road, a key project to connect Calgarians. Once complete, this segment will be safer for vehicles, cyclists and pedestrians.”

Construction on the new bridge is anticipated to get underway in spring 2021 and be completed in late 2023.

Alberta’s Recovery Plan is a bold, ambitious long-term strategy to build, diversify, and create tens of thousands of jobs now. By building schools, roads and other core infrastructure we are benefiting our communities. By diversifying our economy and attracting investment with Canada’s most competitive tax environment, we are putting Alberta on a path for a generation of growth. Alberta came together to save lives by flattening the curve and now we must do the same to save livelihoods, grow and thrive.

After a long year of uncertainty, business closures and public lockdowns, few people have arrived at the end of 2020 with the same outlook they began the year with.

While the lockdowns and layoffs have been unquestionably difficult for individuals of all ages, from all walks of life, the pandemic measures have cast a light on a certain level of adaptability and creativity for many. From launching online shops, providing contactless deliveries and offering online concerts and shows, individuals from all industries have found a way to remain connected during these socially distant times. Furthermore, using social platforms to connect with their community, countless people have used their time at home to pursue a side hustle or launch their own small business. Among the resounding calls to support local during these tough times, many of these endeavors have been met with extensive support from the community and beyond.

Hannah Olson is a 23-year old Licensed Practical Nurse from Strathmore, Alberta, who has spent the last 7 months alternating between working shifts at 3 different hospitals while launching Pink Press Co., her own modern handcrafted clay earring business.
Hannah became a certified LPN after completing the Licensed Practical Nursing Program at Bow Valley College in 2017, and has been rotating among the Alberta Children’s Hospital, Foothills Medical Centre, and Strathmore Hospital for the last 3 years. When the lockdown measures took effect earlier this year, she began using the downtime to pursue her passion for crafting, and discovered she had a knack for clay earrings.
“Initially it was just crafting for pure enjoyment, especially during the lockdown as there was not much else to do anyways,” she says. “When I came across my first pair of clay earrings on Instagram, my mom said to me “You could probably make those.””

Pink Press Co. then began in June as an Instagram business page, initially gathering a small community following. Describing her work as a reflection of her personal style, Hannah uses polymer clay and hypoallergenic earring pieces to handcraft unique, custom studs, pendants, dangle and tassel earrings for formal and casual wear. Products range between $12 and $26, plus shipping.

After receiving an extremely positive response and multiple expressions of interest, Hannah expanded her small business further by launching her own Etsy shop in October. According to Hannah, initial orders came from the surrounding community of Strathmore, eventually reaching Calgary and Airdrie as well. However, shortly after opening her Etsy shop, things really took off.

“I’ve lost track,” she says, “There have been nearly 300 orders on Etsy alone, in addition to custom orders on Instagram and physical shop sales.” She has now successfully shipped handcrafted earrings all across Alberta, as well as to BC, Saskatchewan, Manitoba and Ontario.

Hannah was scheduled to take part in a number of fall and winter markets this holiday season, which were ultimately cancelled as a result of the ongoing COVID-19 pandemic preventative measures. However, she has remained busy filling and shipping custom orders across Canada, and is looking forward to the opportunity to set up at future markets in the New Year.