3:48 pm – Officials with Westerner Park in Red Deer have announced that Kim Mitchell, the iconic Canadian rocker, will co-headline the second night of Westerner Days alongside Chilliwack on Thursday, July 20th. Mitchell will replace Kenny Shields and Streetheart who recently had to cancel their entire 2017 tour due to illness.

12:19 pm – Some road closures to make note of in Sylvan Lake over the next couple of days. They include a southbound lane closure along 46 Street between 47 Avenue & 49 Avenue on July 7. Also, Lakeshore Drive will be closed to vehicular traffic on Friday, July 7 from 10:00 AM to 9:00 PM for a special event, but remains open for pedestrians. Finally, 37 Street will be closed on Saturday, July 8 from 4:00 PM until 10:00 PM for a special event.

12:08 pm – After years of planning and development, an entrepreneurial Lacombe area family and a Red Deer-raised, award-winning California architect have launched an innovative residential community in Lacombe County. Read More.

12:01 pm –  Lacombe County Council has adopted revisions of two of it’s most important documents that will provide guidance on how the County will develop over the next decade. Details Here.

11:51 am – The Abbey Centre Super Kids Triathlon in Blackfalds takes place on Saturday, July 8th! Click Here to register or find out more!

11:09 am – A Red Deer couple plan to enjoy their future very much after winning $726,341 on the June 2nd Lotto Max draw. Robert Mansell couldn’t believe his good fortune and says “We’re going to pay off the house and the rest of our bills,” adding “We also want to go on a holiday, and I’ll probably buy a new truck and trailer.” Mansell purchased his winning Lotto Max ticket at Shoppers Drug Mart, located at 7 Clearview Market Way in Red Deer.

10:58 am – 30 year old Cheyenne Ashley Yellowface faces 16 charges in connection with an armed robbery at the Mac’s convenience store on Jewell Street in Red Deer shortly after 9 am on July 6th. Read More.

9:10 am – From Art Exhibits, to live music and dancing, there’s lots going on in and around Red Deer over the next few days. Click Here to check out the City’s Community Events Calendar!

9:03 am – Tickets are on sale now for Red Deer County’s 2017 Rural Beautification Tour. The tour takes place on Wednesday, July 26th and departs from the Cross Roads Church. There will also be a pickup location in Innisfail. Tickets are only $30 each, with cash, debit, or cheque accepted for payments.

8:53 am – Avoid traffic tie-ups in Red Deer over the next few days by knowing where the road closures and traffic disruptions are. Details Here.

8:47 AM – Ponoka RCMP are thanking the public for their help in finding 25 year old Ryan Roman who was previously reported missing.

8:40 am – Red Deer RCMP are looking for four or five suspects in a stolen Buick Lucerne after they robbed a man at gunpoint in a convenience store parking Thursday afternoon. Details Here.

8:25 am – The Comfortec Red Deer Duathlon is a premium run-bike-run race event taking place at the Penhold Regional Multiplex and in the beautiful Red Deer County countryside, on the morning of Saturday, July 8th. To register or find out more, click here!

7:49 am – Today is day two of Heat Warnings being issued for Red Deer and surrounding areas. We’re expecting a High of 30 this afternoon. Read More.

City of Red Deer / 3 hours ago

OTTAWA — The federal Liberals have withdrawn an amendment to their gun bill aimed at enshrining a definition of banned assault-style firearms.

They cite “legitimate concerns” about the need for more consultation on the measure.

Opposition M-Ps and some firearm advocates applauded the move, while a prominent gun-control group calls it a victory for misinformation about the now-pulled amendment.

The government’s guns bill introduced a controversial new definition of an assault-style weapon and the amendment would have defined what kind of firearms should be banned in Canada and added dozens of new semi-automatic rifles and shotguns to the list.

The Liberals were also under pressure from many of their own members to change or withdraw the definition of guns being banned.

Public Safety Minister Marco Mendicino said in a written statement posted to Twitter that the government had committed to coming up with “a clear, standard definition of what constitutes an assault-style firearm.”

He says this is an emotional issue, and Canadians are counting on us to get it right.

Mendicino adds more discussions, including with Indigenous communities, are crucial.

MPs from all three main opposition parties expressed relief that the amendment was withdrawn, though the Liberals were still under heavy criticism for trying to push it through in the first place.

Conservative Leader Pierre Poilievre declared his party’s efforts to be the sole reason the Liberals pulled the amendment. 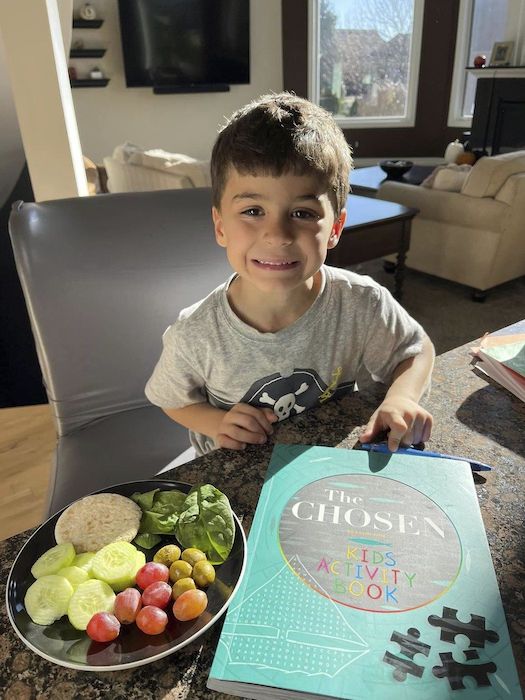 CHESTERFIELD TOWNSHIP, Mich. (AP) — A Michigan man says he was left with a $1,000 bill after his 6-year-old son ordered a virtual smorgasbord of food from several restaurants last weekend, leading to a string of unexpected deliveries — and maybe a starring role in an ad campaign.

Keith Stonehouse said the food piled up quickly at his Detroit-area home Saturday night after he let his son, Mason, use his cellphone to play a game before bed. He said the youngster instead used his father’s Grubhub account to order food from one restaurant after another.

The boy’s mother, Kristin Stonehouse, told The Associated Press on Thursday that Grubhub has reached out to the family and offered them a $1,000 gift card. The company also is considering using the family in an online promotional campaign, she said. Grubhub officials did not immediately respond to a message from the AP seeking comment.

Keith Stonehouse said he was alone with his son while his wife was at the movies when Mason ordered jumbo shrimp, salads, shawarma and chicken pita sandwiches, chili cheese fries and other foods that one Grubhub driver after another delivered to their Chesterfield Township home.

“This was like something out of a ‘Saturday Night Live’ skit,” Keith Stonehouse told MLive.com.

He added: “I don’t really find it funny yet, but I can laugh with people a little bit. It’s a lot of money and it kind of came out of nowhere.”

Keith Stonehouse said his son ordered food from so many different places that Chase Bank sent him a fraud alert declining a $439 order from Happy’s Pizza. But Mason’s $183 order of jumbo shrimp from the same restaurant went through and arrived at the family’s house.

Stonehouse said it took the arrival of a few orders of food for him to realize what was going on. By that time, there was nothing he could do to stop the orders from coming.

Kristin Stonehouse told the AP that Mason is extremely intelligent and has been reading since he was 2 1/2 years old.

She said her husband had just used the Grubhub app on his phone to order dinner before she left and probably just left the app open. She said her son took the phone, hid in the basement and proceeded to order his feast.

She said she and her husband had a talk with Mason on Sunday morning and told him what he did was akin to stealing.

“I don’t think he grasped that concept at first,” she said.

To drive the point home, she and her husband opened up Mason’s piggy bank and pocketed the $115 he had gotten for his birthday in November, telling him the money would go to replenish their accounts. That didn’t seem to faze the boy.

“Then he found a penny on the floor and said he could start all over again,” she said.

Keith Stonehouse said most of the food went into the family’s refrigerators. He said he also invited some neighbors over to eat some of it.

He said he’s heard of things like this happening to other parents, but not at the level he experienced last weekend. He recommends making sure important apps are not readily available for children to click on when they’re using a parent’s phone. He said he’s changing his password.

“I knew this could happen, but you just don’t think your kid is going to do something like this. He’s definitely smart enough, I just didn’t expect it,” Keith Stonehouse said.