It’s another sign the holiday season is getting underway. The Salvation Army’s Christmas Kettle Campaign kicks off on Thursday, November 17th.

An official ceremony to mark the occasion will take place at noon at Bower Place with welcoming remarks from Major Larry Bridger and words of greetings and the first official donation to the campaign this year from Deputy Mayor Buck Buchanan.

In a release, Major Larry Bridger says “We have seen an increase in requests for assistance across our programs and services of about 25 percent over the last year”. A record $235,000 was donated by Central Albertans in last year’s campaign, with $220,000 being the fundraising goal this year.

Bridger says they started a program two years ago to provide breakfast, lunch and dinner for children for the weekends. However, he says the number of kids involved has risen to 197 and a 14th school has now signed on to the program. Bridger says the stats tell them that one in five kids in Central Alberta lives in a food-insecure home, adding that program alone costs $75,000 a year to operate. Bridger adds, “The Kettle campaign is the largest source of funds to help provide services and programs year round.”

The Kettle Campaign runs until December 23rd, with all the money raised remaining in Red Deer. Anyone wishing to help man a kettle for a two hour shift is encouraged to contact the Salvation Army at 403-346-2251.

More from this author
Sports / 9 mins ago 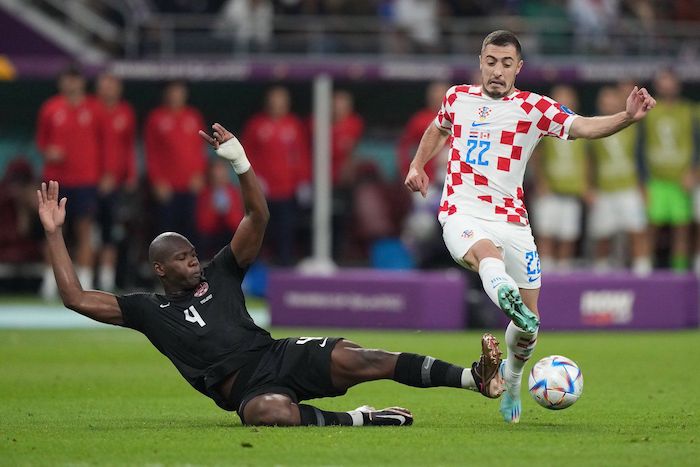 Umm Şalāl ‘Alī – Canada wasted little time Sunday ending its scoring drought at the men’s World Cup via Alphonso Davies but could not hold off Croatia, losing 4-1 to end its hopes of reaching the tournament’s knockout round.

MALAGA, Spain (AP) — Felix Auger-Aliassime fell to his back behind the baseline, then waited for teammates to race off Canada’s bench and pile on top of him.

A few minutes later, the Canadians finally could lift the Davis Cup.

“I think of us all here, we’ve dreamt of this moment,” Auger-Aliassime said.

Canada won the title for the first time on Sunday, beating Australia behind victories from Denis Shapovalov and Auger-Aliassime.

Auger-Aliassime secured the winning point when he downed Alex de Minaur 6-3, 6-4 after Shapovalov opened the day by rolling past Thanasi Kokkinakis 6-2, 6-4.

Seven years after leading Canada to the top of junior tennis, Auger-Aliassime, Shapovalov and their teammates finally got to lift the biggest team trophy in their sport.

“We wanted to grow up and be part of the team and try to help the country win the first title,” Shapovalov said, “so everything is just so surreal right now.”

Shapovalov had dropped both his singles matches this week and needed treatment on his back during a three-set loss Saturday in the semifinals to Lorenzo Sonego of Italy that lasted 3 hours, 15 minutes. But the left-hander moved quickly around the court Sunday, setting up angles to put away winners while racing to a 4-0 lead in the first set.

Auger-Aliassime then finished off his superb second half of the season by completing a perfect week in Spain. He twice had kept the Canadians alive after Shapovalov dropped the opening singles match, and on Saturday he replaced his weary teammate to join Vasek Pospisil for the decisive doubles point.

This time, Auger-Aliassime made sure the doubles match wouldn’t even be necessary. After his teammates poured onto the court to celebrate with him, they got up and danced around in a circle.

Canada had reached the final only once, falling to host Spain in Madrid in 2019, when Rafael Nadal beat Shapovalov for the clinching point after Auger-Aliassime had lost in the opening match.

But with Auger-Aliassime having since surged up the rankings to his current spot at No. 6, the Canadians are a much more formidable team now. They won the ATP Cup in January and finally added the Davis Cup crown to the junior Davis Cup title Auger-Aliassime and Shapovalov led them to in 2015.

Australia was trying for its 29th title and first since current captain Lleyton Hewitt was part of the title-winning team in 2003.

But it was finally time for the Canadians, who were given a wild card into the field when Russia was suspended because of its invasion of Ukraine.

“Look, I think we were very close today,” de Minaur said. “Just wait until the next time we get the same matchup. Hopefully we can get the win and prove that we can do it.”

But Canada will be tough to beat as long as Auger-Aliassime and Shapovalov play.

Shapovalov is just 23 and Auger-Aliassime 22, but both already have been Grand Slam semifinalists and Auger-Aliassime ended 2022 as one of the hottest players on the ATP Tour. He won all of his four titles this year, including three straight weeks in October.

He also beat Carlos Alcaraz in the previous Davis Cup stage in September, just after the Spaniard had won the U.S. Open to rise to No. 1 in the rankings. That victory helped send the Canadians into the quarterfinals, which they started this week by edging Germany.

“They’re not kids anymore, that’s for sure. Not after today — well not after the last couple of years,” said Pospisil, the team veteran at 32. “They’ve been crushing it.”