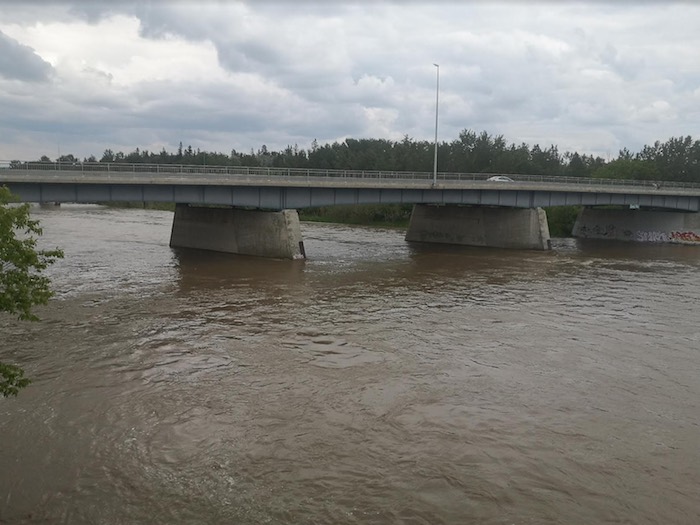 Friday at noon, The City’s Emergency Operations Centre demobilized as flood concerns for our community have subsided.

Since Thursday afternoon, water levels on the Red Deer River and tributaries have stabilized, as well as outflow rates from Dickson Dam. However, the Red Deer River remains under a high streamflow advisory by Alberta Environment and boat launches into the river remain closed.

“We continue to urge people to stay off of the river and the shore while the high streamflow advisory remains in effect,” said Ken McMullen, Director of Emergency Management. “The river has risen significantly this week, and we are seeing natural debris in the river such as fallen trees which pose a significant safety concern to anyone recreating on the river.”

The Lion’s Campground, which was closed on Tuesday, re-opened to campers Friday at noon.

Water levels on the Red Deer River have begun peaking, however the river remains under a high streamflow advisory.

“This afternoon we received information from the Dickson Dam and Alberta Environment that water levels have begun to peak on the Red Deer River, which is positive news and one factor we use when assessing flood risk,” said Ken McMullen, Director of Emergency Management. “Other factors we consider in addition to the level of the Red Deer River, is water levels on the Little Red Deer and Medicine rivers that feed into the Red Deer River downstream of the dam, how quickly snowmelt is occurring in the mountains, as well the precipitation our city and region are experiencing.”

Since Monday, the Red Deer River has risen approximately one and half meters. Some low-lying areas of the McKenzie Trail area saw isolated flooding, however no trails were closed or damage to park infrastructure occurred.

Residents are asked to continue to stay off the river and away from the shore while the high streamflow advisory remains in effect. All boat launches into the river remain closed, and barricades are in place.

The following amenities remain closed at this time:

The following amenities have reopened:

More from this author
City of Red Deer / 12 hours ago

City of Red Deer / 2 weeks ago 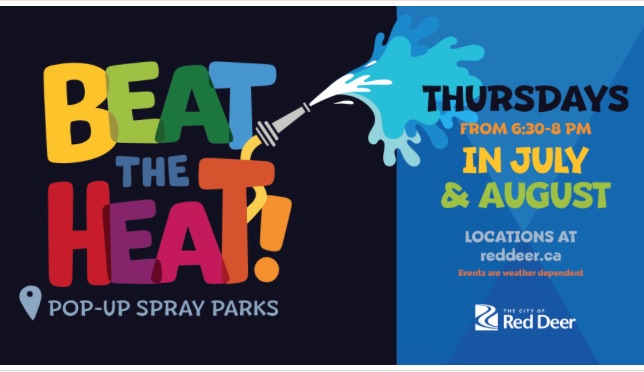 Pop-up spray parks are back this summer

Pop-up spray parks are gearing up again in Red Deer, set to visit eight neighbourhoods across the city this summer. The first pop up is set for this Thursday, July 7 at Barry Wilson Elementary School.

Families and friends are invited to join Red Deer Emergency Services, Municipal Policing Services and the Red Deer RCMP to beat the heat at pop-up spray parks every Thursday this July and August.

Each spray park will run every Thursday from 6:30 – 8 p.m., visiting neighbourhoods across the city as follows:

Events are weather dependant and will be cancelled if weather warnings are in place. The City will provide updates on social media each week if events are in question due to weather.

Information and schedule are available online at www.reddeer.ca/PopUpSprayParks.

A site criteria evaluation matrix will help guide the site selection process for the future shelter in Red Deer after being approved by City Council today. During Council meetings held on June 24, 27 and July 4, Council worked through multiple exercises to determine five criteria, 22 sub-criteria and the weighting assigned to each – making up the Shelter Site Evaluation Matrix as follows:

In the above matrix, the sub-category identified as general under each criteria represents the remaining points allocated to the overarching site criteria.

“The site criteria evaluation matrix approved today will be utilized by administration and City Council to inform decisions about the future site of an integrated shelter in Red Deer,” said Lisa Perkins, Acting City Manager. “The process of developing this matrix has been all about our commitment to consider what we heard from the public, honouring the voice of the City Council in the development of the matrix and selecting a site for the future integrated shelter.”

Along with the criteria and weighting, Council adopted a resolution outlining conditions upon which City Council developed site criteria for the Shelter Site Evaluation Matrix. Ultimately, the site criteria within the matrix are the right criteria “if” the following are true:

These statements will be utilized to inform City Council’s advocacy position around the integrated shelter going forward.

“While the decision in front of City Council in the immediate future pertains specifically to site, we also know there are many conversations to be had with the Province of Alberta about other aspects of shelter including, but not limited to, shelter design, operations and service delivery,” said Mayor Ken Johnston. “We look forward to continued collaboration with our provincial colleagues as we work in partnership to ensure a safe place for our vulnerable citizens to access required services on their journey to permanent housing, which is beneficial for the whole community.”

In addition to the resolutions about the shelter evaluation matrix criteria, City Council resolved that administration will begin preparing a list of possible sites alongside a commercial realtor with Mayor Johnston and the Deputy Mayor providing Council perspective.

Administration will come back to City Council on July 18 to share an update with City Council about the site selection process.