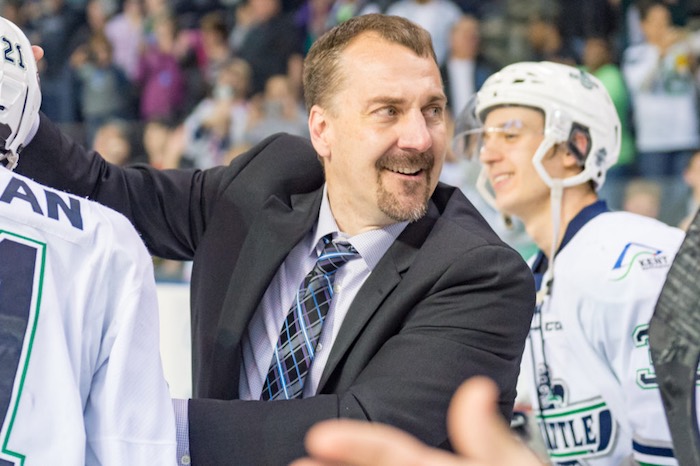 Brent Sutter, President and General Manager of the Red Deer Rebels, is proud to announce that Steve Konowalchuk has been named the 6th Head Coach in team history.

Konowalchuk joins the Rebels from the New York Rangers, where he is currently a Pro Scout.  Prior to the Rangers, he served as an assistant coach with the Colorado Avalanche (2009-11), and Anaheim Ducks (2017-18).  From 2011 to 2017, he lead the Seattle Thunderbirds as their head coach, including back to back WHL Finals appearances in 2016 and 2017, culminating in a WHL Championship in his final season.  Over the 6 seasons, he lead the Thunderbirds to a 219-176-22-15 record, and coached notable NHL players including Matthew Barzal (NYI), Ethan Bear (EDM), Shea Theodore (VGK), & Keegan Kolesar (VGK).

Prior to his coaching career, Konowalchuk spent 13 seasons as a player in the Washington Capitals organization, before retiring after 2 seasons with the Colorado Avalanche in 2006.  He appeared in 790 NHL games, compiling 396 points in that time.

Konowalchuk will officially join the Rebels  in August, after his duties with the Rangers are complete.  The team will look to add an assistant coach this summer.

Brent Sutter – “Steve is the right coach at the right time for our hockey club.  He is a person of high character, whose intensity and work ethic match that of our organization and community.  With Steve’s winning pedigree, we have the right leadership to become a championship calibre team.  We welcome Steve and his family to Central Alberta.”

Steve Konowalchuk – “I would like to thank Brent Sutter and the Red Deer Rebels for the opportunity to coach in the WHL again.  The organization has established itself as a top franchise in the league, and I look forward to working with the staff and players on reaching the organization’s high expectations.  I would also like to express my gratitude to the New York Rangers for the opportunity given to me over the past 3 seasons.”

A year after Euro 2020 was postponed, soccer fans on the edge of their seats as Euro 2021 begins

A 10-acre parcel of land in north Red Deer will be the new home of the 75-bed recovery community.

Alberta’s government and the City of Red Deer worked together to pick the location within the Chiles Industrial Park, directly adjacent to Highway 2A. Construction of the recovery community is anticipated to start this fall.

“Supporting people to find their path to long-term recovery remains a commitment of our government – but we can’t reach this goal alone. Thank you to the City of Red Deer for their dedication to working together to find a site that considers the needs of those seeking support, businesses, local residents and the community as a whole.”

“Thanks to the work of officials at Alberta Infrastructure, in partnership with the City of Red Deer, we are another step closer to having a new home to better support Albertans suffering from addictions on their path to recovery.”

Recovery communities, also known as therapeutic communities, are a form of long-term residential treatment for addiction and used in more than 65 countries around the world.

“The identification of the location of the future therapeutic community marks an important next step towards a solution to many of the health and social challenges our community has contended with for years due to lack of comprehensive health and social infrastructure and programming in our city and region. This project will help respond to the long-standing need for local residential addictions treatment to help address community impacts of the national drug crisis.”

“This announcement means we are one step closer to adding this life-saving support to our community. While new to Alberta, recovery communities have proven to be effective in helping individuals reach long-term addiction recovery. I look forward to the positive difference this new support will have.”

“Addictions have the capacity to disconnect our wills and rob us of the power to decide, inflicting suffering on ourselves, our families and communities. I’m proud to be part of a government focused on supporting Albertans seeking to become free from addictions. Recovery communities are special places, where individuals love and serve each other in their individual journeys to recovery. These are places of miracles, blessing and healing our neighbours, families and communities. This is very exciting news!”

Alberta’s government is committed to a recovery-oriented system of care that provides easy access to a full continuum of services. A $140-million investment over four years is supporting the addition of new publicly funded treatment spaces; the elimination of daily user fees for publicly funded residential addiction treatment; and services to reduce harm, such as the Digital Overdose Prevention System app, the introduction of nasal naloxone kits and the expansion of opioid agonist therapy.

This $140-million commitment is in addition to the more than $800 million Alberta Health Services spends annually to provide mental health and addiction services in communities across the province.

The future location for a therapeutic community in Red Deer was announced today, with the Provincial Government identifying 10 acres of land within the Chiles Industrial Park as the future site in Red Deer. The facility, announced on June 18, 2020, will be home to 75 treatment beds and will provide long-term residential treatment to individuals struggling with addiction.

From The Mayor of Red Deer

“The future location for a new therapeutic community in Red Deer was announced today, with the Provincial Government identifying 10 acres of land located in north Red Deer as the future site for the facility.Formerly owned by The City of Red Deer, the Province of Alberta has signed an agreement to purchase land from The City with the intent to build the new therapeutic community. The agreement is in place for five to ten years, and if the Government of Alberta chooses to move the facility to another site, the land will return to The City of Red Deer. Once built, the new facility will be home to 75 treatment beds and will provide long-term residential treatment to individuals struggling with addiction. As this is a Provincial project, there is no operating investment from The City, however The City is contributing in-kind capital contributions through a utility connection to bring water and sewer servicing to the development as well as providing some additional landscaping for the area.

The identification of this land marks the next step towards a solution to many of the health and social challenges our community has contended with for years due to lack of comprehensive health and social infrastructure and programming in our city and region. This project will help respond to the long-standing need for local residential addictions treatment to help address community impacts of the national drug crisis.

Located approximately one kilometer north of Highway 11A and Gaetz Avenue in the Chiles Industrial Park, directly adjacent to Highway 2A and outside the urban core, this site respects the anticipated needs of future clients who are being treated for their addictions, while considering the needs of businesses and the entire community in mind. This location also repurposes underutilized public lands.

Development is expected to occur this summer, with all further development processes and approvals now under the jurisdiction of the Province of Alberta.

On behalf of my fellow members of Council, I would like to extend our thanks to the Government of Alberta for hearing us and fulfilling this long-standing imperative for our community, and for supporting us in our call for securing a residential treatment site in Red Deer.

Citizens with questions or concerns about approvals and development processes can reach out to the Ministry of Infrastructure, or to our local MLAs (Mr. Jason Stephan, MLA for Red Deer South or the Honourable Adriana LaGrange, MLA for Red Deer North: www.assembly.ab.ca/members/members-of-the-legislative-assembly).” 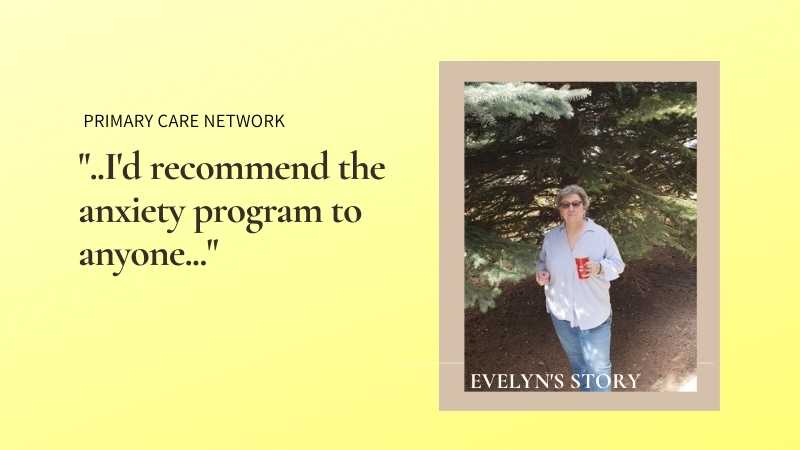 Evelyn has suffered from anxiety and depression for some time but generally had it under control. Then a family incident last summer sent her into crash mode. He family doctor suggested she see a Red Deer PCN mental health counselor. The counselor was excellent and set her on a good path. He also recommended that she go to the Anxiety to Calm program. She did sign up but did not attend as she wasn’t ready. After more work with her counselor she attended.

Evelyn says, “It was amazing”. When I did the assessment at the start of the class all my answers were low and on the left hand side. When I did my final assessment, all the answers were to the far right, amazingly better. I couldn’t believe that had been me just 8 weeks before.

As I went through the program I thought of how I spent the last years with my mom  before she died and I would always say to her I pray for your comfort and joy. Last Christmas I got a card from children I used to babysit and the words comfort and joy were prominent on the card. That prompted me to look for comfort and joy and now I realize it is right in front of me. I get it from a nice walk, touching the trees, a steaming cup of coffee or a hot shower. I have learned to savor all of the wonderful everyday things in life. I have a much healthier mindset- I have come so far.

I thank the counselor for his patience and for nudging me to the Anxiety program. I would recommend it to everybody. I also really liked that the counselor was right in my doctor’s clinic. It was comfortable and gave me trust in him from the start.”

I am now focused on what is most important to me!