Following extensive discussions with our provincial and federal partners, Alberta is temporarily pausing the use of AstraZeneca in anyone under the age of 55.

This is a precautionary measure that is being taken across Canada.

As I mentioned to you last week, there have been some rare instances of blood clots reported in Europe that require more investigation.

While all available data and evidence shows no increase in the overall risk of blood clots for those who receive AstraZeneca, in a very small number of people who received the vaccine, a blood clot in the brain was reported 4 to 20 days after the vaccine.

These incidents are rare, and at this point seem to be linked to AstraZeneca, possibly through an immune response.

There is no evidence of any similar issues linked to the other vaccines that we are using in Alberta.

There have also been no reported cases of these blood clots following immunization, in Alberta or anywhere in Canada.

However, safety is always our top priority.

This pause will allow Health Canada to conduct further assessments and gather more information from around the world.

This change is based on new information reported late last week, and over the weekend regarding some additional cases and a lack of a connection to a specific lot or batch of the vaccine.

I want to assure you that anyone under the age of 55 who has already received a dose of AstraZeneca vaccine is not considered to be at high risk of blood clots.

However, as with anyone who receives any medication, including vaccine, they should monitor their health and seek immediate medical attention if they experience health concerns.

We will continue monitoring the emerging evidence around this issue.

We will also continue doing everything possible to ensure that our immunization program remains safe and effective.

Studies are underway that will help determine what vaccine those already immunized with AstraZeneca will be able to receive when it comes time for their second dose in the months ahead. 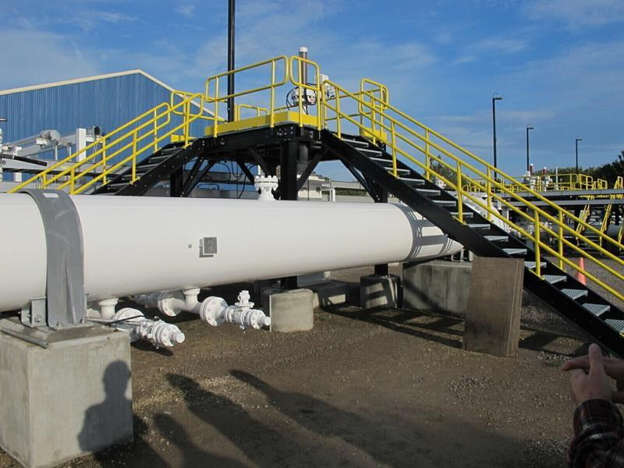 WASHINGTON — Enbridge Inc. and the state of Michigan are renewing their legal hostilities over the future of the controversial Line 5 pipeline — and their latest court battle looks an awful lot like the last one.

Instead, the state is focusing its efforts on a separate but similar circuit court action filed in 2019 that spent last year in a state of suspended animation, and which Enbridge is once again arguing should be heard by a federal judge because it comprises an important foreign policy question.

Too late, Nessel argues in her latest tract of court documents, filed Friday with the very same judge who heard the original arguments.

“The present action was pending in state court for nearly two and a half years before (Enbridge) removed it to this court,” she says. Federal law makes it clear that cases can only be removed to federal jurisdiction within 30 days of a complaint being filed, the documents note.

“It is more than two years too late, and federal courts do not condone this type of gamesmanship and abuse of the removal statutes.”

By Nessel’s logic, Enbridge knew perfectly well it could have petitioned to have the case removed when it was originally filed but opted not to do so until now — a “remarkably dilatory” act based on an argument that “defies the facts, the law and basic common sense.”

Enbridge has yet to file a response to Nessel’s latest brief. However, the company has repeatedly indicated it has no plans to shut down Line 5 voluntarily and will continue to fight in court to keep it running.

The overarching question — whether a dispute over the lawful operation of an international, cross-border pipeline should be heard by a federal judge or at the state court level — is a carbon copy of the battle the two sides fought in front of Neff for the better part of last year.

The clash first erupted in November 2020, when Whitmer abruptly revoked the 68-year-old easement that had long allowed Calgary-based Enbridge to operate the line. She cited the risk of environmental catastrophe in the Straits of Mackinac, where Line 5 crosses the Great Lakes.

The pipeline ferries upwards of 540,000 barrels per day of crude oil and natural gas liquids across the Canada-U.S. border and the Great Lakes by way of a twin line that runs along the lake bed beneath the straits linking Lake Michigan and Lake Huron.

Proponents call Line 5 a vital and indispensable source of energy, especially propane, for several Midwestern states, including Michigan and Ohio. It is also a key source of feedstock for critical refineries on the northern side of the border, including those that supply jet fuel to some of Canada’s busiest airports.

Enbridge and its allies, including the federal Liberal government, insist that the pipeline is too vital an energy artery to both countries for it to be suddenly shut down, and the question of its continued safe operation is one to be settled between Ottawa and the White House.

Central to that argument is a 1977 bilateral treaty that was conceived to avoid disruptions to the cross-border flow of energy, one that proved to be a key element in Enbridge’s strategy to convince Neff that the controversy should be adjucated by a federal judge.

Canada said late last year that planning was “well underway” for bilateral treaty talks between Canada and the United States in the dispute over the pipeline, although the timeline for formal negotiations has never been publicly disclosed.

Last year, lawyers for the federal government also filed a statement in court expressing support for Enbridge’s argument, known in legal parlance as an amicus brief. It was not immediately clear Tuesday whether Ottawa expects to do so again.

The White House has acknowledged that the U.S. Army Corps of Engineers is conducting an environmental assessment on Enbridge’s plans to encase the underwater portion of the twin pipeline in a deep, fortified underground tunnel. But they have so far resisted pressure to get involved in the dispute itself.

Critics want the line shut down, arguing it’s only a matter of time before an anchor strike or technical failure triggers a catastrophic environmental disaster in one of the area’s most important watersheds. Michigan has every right to take whatever steps are necessary to protect it, the National Wildlife Federation said in a statement.

“This motion is critical because if successful, it will allow the state courts to consider for the first time whether the risks of a rupture of Line 5 in the Great Lakes justify the continued operation of the pipeline,” said federation attorney Andy Buchsbaum.

“If Enbridge’s gamesmanship is successful, it would allow Enbridge to circumvent Michigan’s ability to protect the Great Lakes and to tie the case up in federal court by months, if not years, leaving the Great Lakes in great danger.”

This report by The Canadian Press was first published Jan. 18,2022.

CALGARY — Sean Monahan’s first two-goal game of the season helped the slumping Calgary Flames to a surprise 5-1 victory over the NHL-leading Florida Panthers on Tuesday.

After scoring a power-play goal on a deflection at 16:03 of the second period to make it 3-1, Monahan put the game away in the third, making it 5-1 at 6:43, taking a drop pass from Johnny Gaudreau and neatly beating goaltender Spencer Knight on a move from in-close.

Rasmus Andersson, with his first of the season, Matthew Tkachuk and Blake Coleman also scored for Calgary (18-11-6), which snapped a four-game losing streak and won on home ice for the first time since Nov. 29.

The Flames entered the night 2-7-1 in their previous 10 games.

Sam Bennett scored the lone goal for Florida (26-8-5), which had its four-game winning streak and nine-game points-streak (8-0-1) snapped.

The next outing for both teams will be in Edmonton with the Panthers’ second stop on a five-game road trip taking place on Thursday. Calgary isn’t back in action until Saturday when the Flames play the Oilers at Rogers Place.

Markstrom, who has given up four or more goals in four of his previous five starts, made 28 stops to improve to 13-8-5.

After starting the last seven games, Sergei Bobrovsky got the night off with Knight getting his first start since Dec. 30. Knight made 26 saves. His record falls to 7-5-2.

Calgary got off to a fast start, getting a power play four minutes into the game and taking just 23 seconds to take advantage with Andersson knocking in his own rebound from the slot.

The Flames extended their lead to 2-0 at 11:36 of the first. A stretch of prolonged pressure by Calgary’s newly formed second line culminated in Coleman’s seventh goal, the assists going to his linemates Andrew Mangiapane and Mikael Backlund.

But Bennett, in his first game back in Calgary scored 12:36 into the second to cut Florida’s deficit in half. Bennett was traded to Florida ahead of the trade deadline last season after logging 402 games with Calgary over six seasons. He’s been a revelation since joining the Panthers scoring 22 goals in 40 games.

The power play was key for the Flames striking twice on three opportunities after entering the game 0-for-10 during the losing streak.

Gaudreau had his first four-assist game ever on home ice and just the second of his career. Tkachuk also kept his offensive hot streak going with three points. He has 13 points (six goals, seven assists) over his last eight games.

Although the Panthers own the league’s best home record at 21-3-0, they haven’t enjoyed the same success away from FLA Live Arena, now 5-5-5.

For the Flames, they have struggled similarly at the Saddledome, picking up their first win since Nov. 29. They’re 5-4-4 on the year.

Notes: Gaudreau’s only other four-assist game was in Nashville on Feb. 21, 2017… It was the first time this season Florida did not get a point from a defenceman… Mason Marchment returned to the Panthers lineup for the first time since Jan. 1. An assist gives him a five-game point streak.

This report by The Canadian Press was first published Jan. 18, 2022.