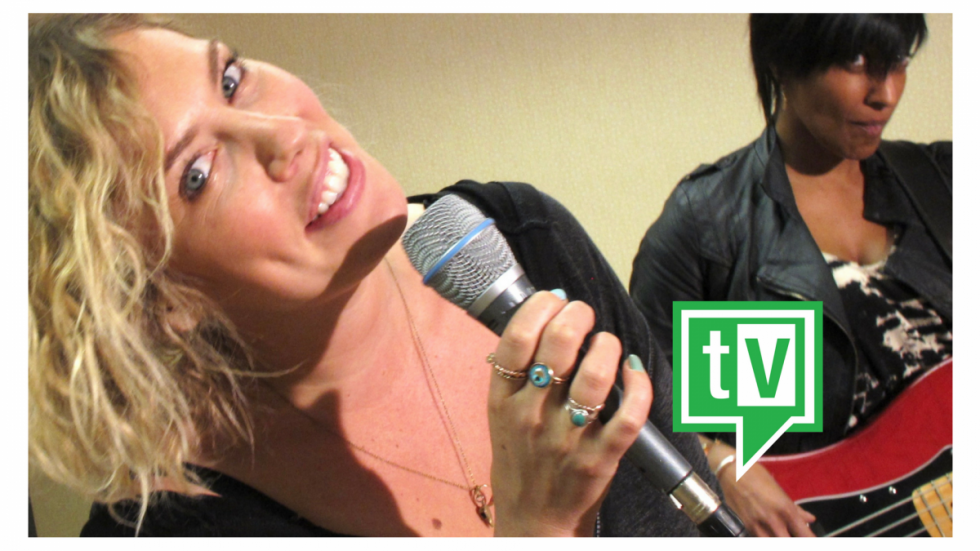 Though Todayville went live only 3 short months ago, we’ve had some amazing talent come find us in Red Deer.  We have compiled our favourite interviews and photos into one story. Now you can see why we are so excited about promoting some of these great Canadian artists.

COLEMAN HELL – Juno-nominated artist, Coleman Hell stopped by Todayville in November.  Born and raised in Thunder Bay, Coleman Hell is a singer-songwriter and producer now based in Toronto.  His breakthrough single “2 Heads”, described as a “banjo-R&B-dance mosaic” topped streaming-service charts in early 2015, leading to a record deal with Columbia Records. He talked to Duane Rolheiser about his current tour and what’s up next.

JOCELYN ALICE- Sometimes you meet someone that kind of blows your mind because they’re so nice, talented, unassuming, witty, and they literally shine.  That’s how we all felt when Jocelyn Alice and Lisa Jacobs brought their irresistible personalities and ridiculous talent to Todayville enroute to a one-nighter at Red Deer’s International Beer Haus.

Jocelyn Alice is a Calgarian who is on the move to Nashville on a full time basis. Jocelyn’s debut single as a solo artist, the 2015 summer hit ‘Jackpot’, was certified Platinum in Canada in September 2016 and reached the top 15 on multiple Canadian commercial radio charts. Jocelyn received a 2016 SOCAN Pop/Rock Music Award for Jackpot and received Canadian Radio Music Awards nominations in 2016.  She also received Canadian Music Week Indie Awards nominations in 2016 for Pop Artist of the Year and Single of the Year.

Prior to her solo career, Jocelyn and bassist Lisa Jacobs performed in the indie soul pop duo Jocelyn & Lisa (a unique blend of pop, soul, reggae, and funk). Jocelyn has co-written music featured in the hit TV shows One Tree Hill and Pretty Little Liars, the movie Dear Santa, and a television commercial in Canada for Shaw TV.

We met Jocelyn in the midst of a whirlwind. She had been touring heavily, made the trip to Red Deer from Calgary in a pretty significant snowstorm, she was tired, and getting ready to move to Nashville in February.  In this interview with Duane Rolheiser,  she opened up about her new-found success, the changes it means in how her career is managed including giving up some control of her career. Also check out the photo gallery of the interview and the outstanding acoustic performance her and Lisa did for us and our guests.

Here’s a look at some photos I took during the interview and their acoustic performance.  We became fans!

Enjoy another excellent Canadian artist who’s on her way to some really big things. Click to watch Jocelyn Alice’s video for the hit song JACKPOT

BLEEKER- They’re all younger than 30, but Bleeker is anything but inexperienced. The Orillia, Ontario based rockers have been performing, writing, and touring for more than half their lives. Brothers Taylor and Cole Perkins were just 14 and 12 years old when they started Bleeker. The band has had plenty of success, but 2016 has been a banner year. Bleaker was signed by Sony and they’ve been touring internationally for months. Now the best news of all, Bleaker’s song “Highway’ is shooting up the charts, and is currently a top 10 Canadian hit!

Bleeker performed Tuesday night at Bo’s opening up for Canadian rock legends The Trews. But first Bleeker stopped in at Todayville for an interview and an accoustic performance. Named after the street where they grew up in Orillia, Bleeker is Taylor Perkins, his brother Cole and childhood friend Mike Van Dyk. Here are the boys from Bleeker Street!

RIA MAE- Before 2015, Ria Mae was growing her audience at a slow but steady pace, playing bars and clubs as an independent artist. Then Mae released “Clothes Off” and everything changed. Mae signed with Sony Music and has exploded onto the national music scene.

CBC Music called Ria Mae the “Next Big Thing” in 2015 and Spotify Canada named her 2016 “Spotlight Artist”. “Clothes Off” was nominated for Single of the Year at the 2016 Juno Awards.

Her singles “Ooh Love”, “Gold” and “Clothes Off” have been viewed well over 5 million times on VEVO.

This is Ria Mae.

RYAN LANGLOIS- It’s been a year of change for Red Deer singer Ryan Langlois.  The lead man for The Boom Chucka Boys is heading in a new direction after the Boys went their separate ways this year. As 2016 comes to an end, Langlois is about to head to the recording studio again.. this time with Ryan Langlois and the Revelation. Ryan performed in December at The International Beer Haus opening up for Duane Steele, another Canadian country star who calls Red Deer home.

What Are You Doing New Year’s Eve Red Deer? 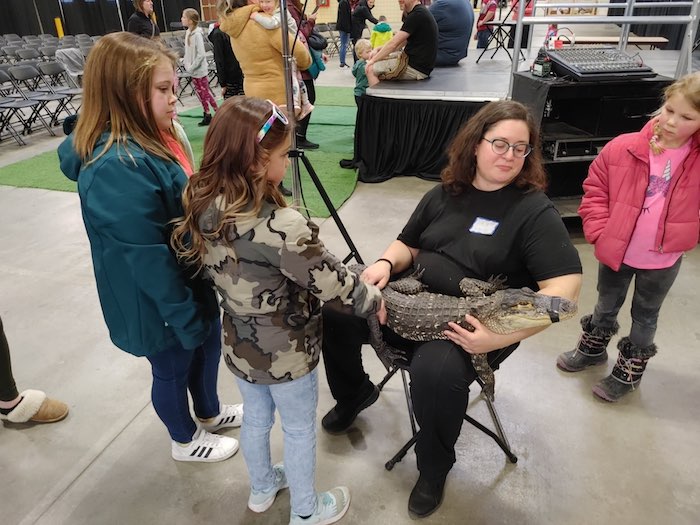 See a Sloth! Pet a Kangaroo! Meet a Tegu!
Hang with an Iguana! And many more amazing animals.
The YYC Nature Centre, Cobb’s Adventure Park, & Cobb’s Exotic Animal Rescue are bringing you a not to be missed event in Red Deer Feb 3rd – Feb 5th

Diversity of Living Things
What is the difference between frogs and toads? How do animals adapt? Learn about different species and life on earth.

Journey to the Amazon
See & interact with some of the incredible animals that call the Amazon home. The worlds largest rainforest comes to life!

This is Africa
Learn about the planet’s 2nd largest continent.

A small group guided experience with many of our animals! VIP Experiences are VERY LIMITED per day. One at the beginning of the day and one at the end of the day. Choose either the Parrot and Mammal Experience or the Reptile experience. $150/person in advance including admission, $175/person at the door.

Pet/feed a wallaby. Feed a porcupine. Hug a boa. Includes photo opportunity with your camera. $20 – $60 per person, per experience.

Learn about some of the largest reptiles on earth that call the Amazon home!

Learn about Sloths, Sugar Gliders, Kangaroos and much more!

What Is The Wildlife Festival?

The Wildlife Festival is an annual interactive experience that highlights animals and their habitats. Our mission is to inspire and educate people of all ages by connecting with animals. Our entertaining stage shows, educational displays and interactive experiences with the animals will teach, entertain and delight all who attend.

Cobb’s Exotic Animal Rescue is a non-profit division of Cobb’s Adventure Park. Cobb’s is home to hundreds of animals including Kangaroos, Wallabies, Wallaroos, Llamas, Emus, Porcupines and more. Their mission is to give all exotic animals a safe and healthy life. Their current goal is to build an education center as a place to house and a place to educate the public on what it means to be involved with exotic animals. Far too often people buy exotic animals without thinking of the consequences long term. Many of these animals outgrow their spaces and even sometimes outlive their owners. As a result, exotic animals are frequently sold and resold many times, and sadly many become inhumanely disposed of. Cobb’s Exotic Animal Rescue aims to be a link to the solution. Cobbs is able to provide the appropriate care and nurturing of many of these species and gives them the unique attention that they require.

Click below to donate, and be a part of building an education center in Alberta for exotic animals in need.

The Wildlife Festival arrived in western Canada in 2015, produced by Little Ray’s Nature Centre & The Canadian Raptor Conservancy in Ontario. In 2017 Jason Clevett of Reptile Parties INC joined the team and returned again in 2019.

Do we get to pet animals with a regular ticket?

Some animals are available for petting and hands on opportunities. We offer paid photo & interaction opportunities with select animals as well as VIP experiences behind the scenes.

What comes with the VIP Experience ticket?

Spend quality private time with the animals. An exclusive hands on experience with the animals, you can take photos and ask questions behind the scenes and meet the animals trainers too! VIP experiences are VERY limited, so purchase in advance is recommended.

Is this event for all ages?

Yes! Except for our ADULTS ONLY exclusive which is on Friday evening from 7-9pm.

What if I am afraid of snakes or spiders, but want to see the other animals?

Don’t worry, you can still get a chance to spend time with the other animals. We have several educational exhibits in place and the stage shows present an opportunity to learn about the animals from a comfortable distance.

Which animals will be at The Wildlife Festival?

Kangaroo, Snake, Tortoise, Tegu, Toad, Wallaby, Sugar Glider, Sloth and more! Although we have many animals attending the show, we cannot guarantee that all of them will make an appearance due to many circumstances, sensitivities, and personalities these animals can have.

Where did the animals come from?

Many of the animals under our care are rescues from homes that could no longer care for them. Others have been obtained by ethical breeders for education.

Are these animals from the wild?

None of the animals at The Wildlife Festival are from the wild. They are commonly available pets that have primarily been born/hatched under human care. Since they have been raised in captivity entirely, they are not candidates to be released into the wild.

Where Does The Money Go?

100% of the proceeds goes towards the care and support of these animals. 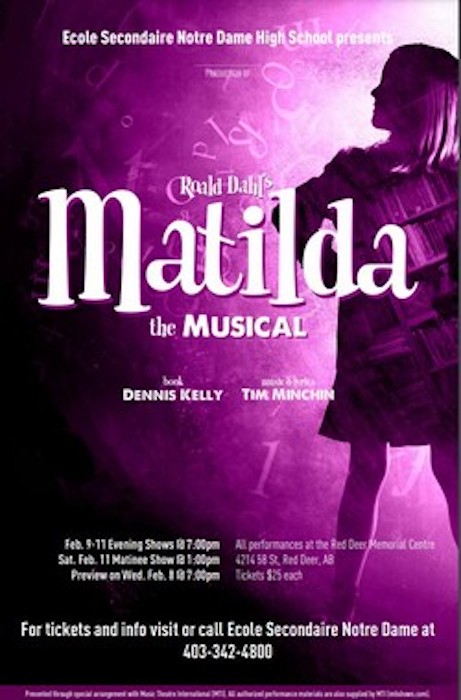