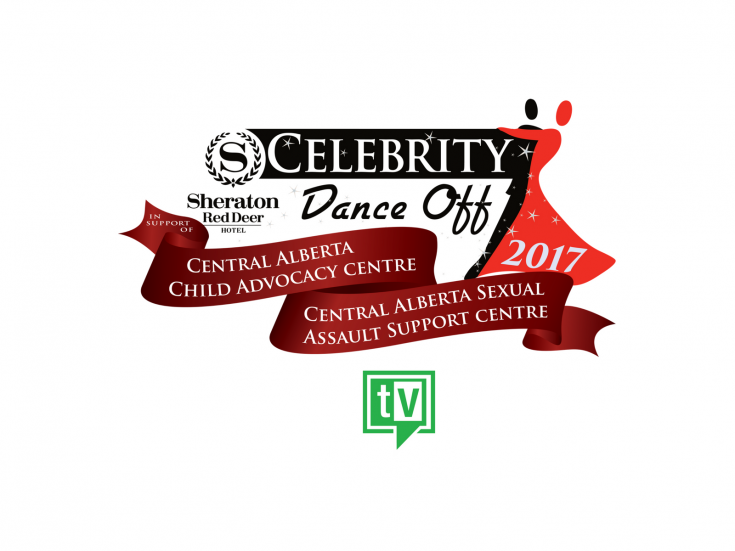 There could be no Sheraton Celebrity Dance Off without eight critical participants who step forward each year to take on the gargantuan task of learning a very complex dance routine and then raising an incredible amount of money for a very worthy cause.  This year the “Class” of 2017 are truly in a class of their own!  The amount of money they’ve raised will be announced at the event and it will be astounding!  Terry Loewen representing the Central Alberta Child Advocacy Centre and Christine Moore, founder of the event and c0-chair thought it was important to say thank you… or more accurately THANK YOU… to

16 tickets have become available for the Friday night’s Sheraton Celebrity Dance Off. Share this news with someone you know who wants to go, but couldn’t get a ticket to the show which has been sold out for months!

That’s 2 tables of tickets, 8 at each table. The tickets will be sold on a first come first serve basis, from 1 to all remaining available. They are $200 each.

For information about the Sheraton Celebrity Dance Off CLICK HERE and to see all of the stories Todayville has produced about the Dance Off, CLICK HERE.

More from this author
Economy / 4 days ago

There are a lot of moving parts (excuse the pun) in Red Deer’s annual Celebrity Dance Off.  But in the end, Dance Off sets out to accomplish two goals with each performance.   One is to raise funds for a much needed cause in our region.   Two is to raise the profile of that same cause.  In the long run, the second goal is probably more important.  A higher profile can mean more ongoing support from volunteers and through donations.

In 2019 the Celebrity Dance Off partnered with the Friends of the Red Deer Regional Hospital Centre.  Here’s what Dance Off Chair Christine Moore said when the partnership was announced.

“With roots going back to 1904, this group of dedicated volunteers have fundraised to support the care and comfort of patients at our hospital. Over the last 38 years, they have raised over $7 million. They exemplify everything about volunteerism and giving back to the community. They are the unsung heroes of our hospital.”

And this comes from the Friends website: “our mission is to facilitate innovative fundraising programs for equipment and services that benefit patient care and comfort in the Red Deer Regional Hospital…

Our fundraising dollars are geared to the purchase of medical furniture and fixtures, and to patient care and comfort up to a maximum of $4,999.00 per item. The Friends Centre assists with the provision of day-to-day supplies and comfort items. This includes personal grooming items, nursing supplies such as blood pressure monitors, blanket warmers and furniture for the units to share.”

Sometimes though it’s just best to ask those who see the benefits the Friends bring every day… Please enjoy this video.

Travolta and Newton-John wrap up the Celebrity Dance Off

Trevor Sopracolle went from watching the Celebrity Dance Off last year, to being front and centre this year!  Trevor was the first “Oil Man” in the Celebrity Dance Off.  Hopefully the first of many.  He’s also one of the toughest looking Travolta’s you’ll ever see.  Trevor and his pro partner Alex McPherson wrapped up the show with a brilliant choice of music from Grease.  “Olivia” was amazing.. and “John” turned the world upside down.  See for yourself. ..

I was born in Goodsoil, Saskatchewan and moved to Alberta when I was in grade 3 and spent most of my youth in Consort.

I lost my Dad to cancer when I was in high school and so I grew up fast. At 17 I secured a loan for a 2-bedroom house with a dirt floor basement. To make ends meet, I worked as a tire technician at the local tire shop while attending high school. One of the only benefits of owning your own place in high school is having the coolest parties after the high school dances!

I moved to Red Deer in 1999 at the age of 19 and began working at Fountain Tire. Not long later a local snubbing company hired me. Over a 10-year period I worked my way up becoming a senior supervisor overseeing most of the higher-class pressure jobs and many overseas projects. In 2008, Garrett Radchenko and I started Goliath Snubbing Ltd., and we haven’t looked back.

I have also been blessed with the best kids a Dad could ask for. Being a single Dad with three kids under 8 definitely keeps me busy.