Red Red Deer Catholic Regional Schools is delighted to announce the appointment of Mrs. Kathleen Finnigan as the division’s new Superintendent of Schools.

“Over the past four months, the Board of Trustees has been conducting a nationwide search for a new Superintendent of Schools. A key component of the process involved reaching out to key stakeholders to gather their thoughts and opinions regarding the new superintendent,” said Kim Pasula, Board Chair at Red Deer Regional Schools.

Finnigan grew up and graduated in Delburne, a small town east of Red Deer. She comes from a large farming family in which she is one of six girls along with one brother. Finnigan values community. She was taught the importance of community from her parents who were role models of servant leadership with their work in Delburne, Central Alberta and on the provincial scene. Finnigan believes in the saying, “It takes a village to raise a child” and is looking forward to working in a team to enhance the Red Deer Catholic community whereby students will continue to be the center of all decisions. Finnigan and her husband, Terry, have four boys all educated in Red Deer Catholic Regional Schools.

Finnigan has 34 years of experience as a professional Catholic educator within the division in the roles as teacher, counsellor, school administrator and senior administrator. She has been part of five different school communities in Red Deer: St. Thomas Aquinas Middle School, Maryview School, Holy Family School, St. Martin de Porres School and St. Patrick’s Community School. Finnigan’s first principalship was at St. Martin’s where she worked in a team with a variety of stakeholders to develop the first fine arts school in Central Alberta.

Over the years, she has won many awards including Women of Excellence for Central Alberta (2016), Canada’s Outstanding Principal (2010), Alberta’s Excellence in Teaching Semi-Finalist (2009), Leadership Award from the Council of School Administrators (2001) and Health and Physical Education Award through the HPEC Council (1989).

The employment of the former Superintendent was concluded by the Board of Trustees in February 2020 and at that time Finnigan was appointed Acting Superintendent of Schools. Since then, she has navigated the division through the COVID-19 pandemic (school closures, at-home learning and school re-entry of in-person learning) and the new funding model from Alberta Education.

“I am blessed to have been appointed Superintendent at Red Deer Catholic Regional Schools; a school division known for exemplary staff and school administrators working together to ensure that Christ is known to students while aspiring to excellence. Alongside the Board of Trustees and staff we will continue to foster gospel centred communities of hope through communication, collaboration, and innovation as we lead our school communities together,” said Superintendent, Kathleen Finnigan at Red Deer Catholic Regional Schools.

“Kathleen was chosen in a highly competitive selection process from a strong field of candidates. She is a highly impressive talent known for her collaborative leadership style that will serve her and our entire staff well in advancing the mission of Red Deer Catholic Regional Schools to make Christ known to children,” said Pasula.

Fright Night Drive In Theatre this weekend at Westerner Park 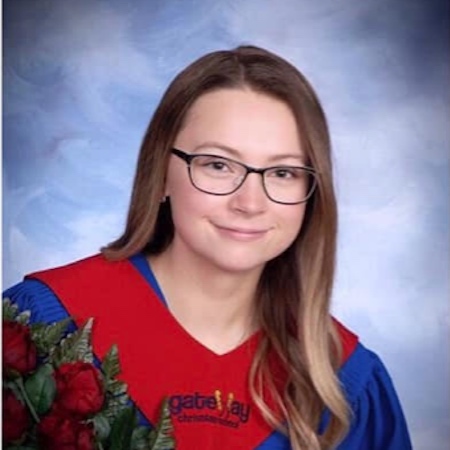 Gateway Valedictorian to become a teacher to make a difference

Following in her mother’s footsteps after seeing the difference she has made in the lives of students is Jessica Snyder’s goal in becoming a teacher after she graduates from Gateway Christian School this month.

Jessica has been named the Gateway’s valedictorian this year. Graduation ceremonies will take place June 29 at Canyon Ski Resort.

“I was so excited to learn I was named valedictorian. I was so happy!” said Jessica. “It’s such a huge honour that I get to address my class and congratulate them.”

She added being named valedictorian has been a goal of hers since middle school.

“It took a lot of hard work and I had to be very dedicated to my work. It took a lot of strength especially through COVID,” said Jessica. “My family and friends really helped me to keep going and keep learning. It’s all a learning experience, so that was a motivator to me – the more I devoted myself to my work, the more I learned.”

Completing high school in a global pandemic has presented a number of challenges, but Jessica didn’t let that stop her from achieving her goals.

Looking back at her time in school, Jessica said there were many highlights, but it’s the small moments that stand out to her the most.

“Most people like to remember the big things that happen like school trips, which were so much fun. But I think the real moments where I bonded with my class were the small moments like sitting and playing Uno at lunch, and if it’s a hot day outside, we go and play at the park. It’s those small moments which meant the most to me.”

As for her future, Jessica will attend Red Deer College next year as she has been accepted to the Bachelor of Education program.

“I am going to go with the secondary route, which means I will be teaching in the higher grades,” she said. “My mom is a teacher, so I have taken after that just seeing the impact she has had on students’ lives. Growing up in a family with a teacher has definitely helped shape my life, so I think it would be great for me to follow in her path and make it my own.”

Jessica added she is excited to address her fellow classmates during graduation.

“Over the past couple of years we’ve had to show a steadfast character – being loyal and committed, devoted and dedicated whether that’s with our relationships or working towards finding a job,” she said. “I want to encourage my class to keep going with that because it helps us get to great goals like achieving our graduation.”

“Jessica is a hard working student with attention to detail and a love of learning. She takes her studies seriously, working diligently to excel in every area,” he said. “She cares about her classmates, is fun and energetic, and works on relationships as much as her studies. Jessica’s willingness to help others, improve herself, and constantly improve are qualities that will take her far in life!” 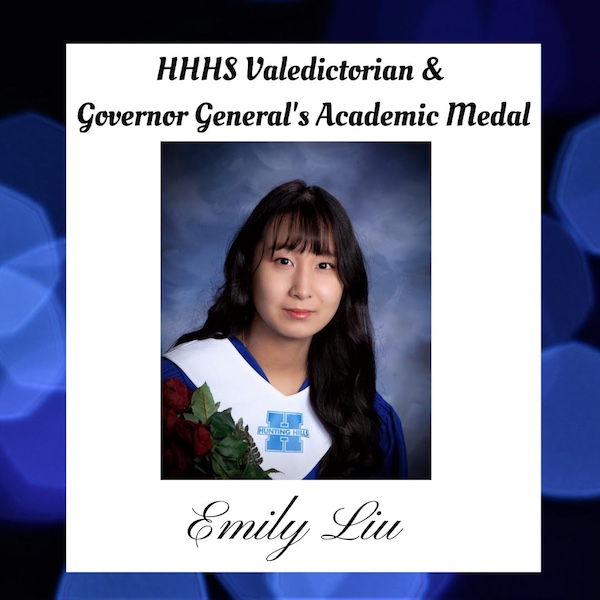 This year has been like no other for the Graduating Class of 2021, but the valedictorian at Hunting Hills High School is not letting the pandemic stop her from achieving her goals.

“It’s an incredible honour to be named valedictorian. I was very proud of myself when I learned that I was going to be this year’s valedictorian,” she said. “In Grade 9 when I first received the honour of being the top academic student in my class, that really came as a huge shock to me because I always knew I performed well in school, but I never imagined I could be the top academic student. After that, it was something that I was really inspired to work towards, and it’s kept me motivated ever since.”

Emily added when she reflects on her high school experience, she could never have predicted we would be in the midst of a global pandemic.

“I don’t know if it necessarily took away from my high school experience, but it’s definitely hindered me in my day-to-day life whether it’s trying to pay attention during online school, or being able to hang out with my friends,” she said.

Graduation ceremonies for Hunting Hills High School will take place on June 25 at the Centrium. The day will include staggered ceremonies with three groups of graduates at a time in compliance with Alberta Health Services guidelines.

Emily said her message to fellow graduates is one they can carry into the future.

“If there’s one thing that this pandemic has taught me it’s that the relationships we have in our lives are so incredibly precious. When your only way of communicating with your friends or your family is through a screen or a phone call, there’s aspects of simple physical interaction that you really can’t get through in an online medium,” she said. “We need to treasure the relationships we have in our lives, maybe a little more. It may be a little clichè, but you really don’t appreciate what you have in your life until they are gone.”

Looking to the future, Emily said she hopes to soon be able to explore the world once restrictions allow. She has also been accepted to the University of Alberta.

“I’m going to study biochemistry. It’s one of my hopes to pursue a career in the medical field in the future,” she said, adding her volunteer work has given her an interest in that field. “I have been volunteering at the Red Deer Hospital for the past four years, and I’ve also been volunteering as a piano player at the Red Deer Hospice. I think my time at the hospital and hospice has been really enriching in the way that I am able to interact with people and learn more about people’s lives and maybe provide them some kind of comfort or support when they are in a really vulnerable moment.”

“An accomplished pianist, community volunteer, and HHHS Leadership student, Emily possesses an incredible work ethic. In every endeavour, whether it be academics or extracurricular activities, she embodies kindness, determination, and tenacity,” she said. “Along with excelling in academics, Emily has completed her Grade 10 Piano with First Class Honours (Royal Conservatory). As a Leadership student, she has dedicated countless hours to our Bikeathon, Enviro Club and school activities. HHHS is honoured to recognize Emily as our 2021 Valedictorian and Governor General’s Medal recipient.”