“The vibe in the dressing room is fantastic. The girls seem to really get along and care about each other,” he says. “They seem to be really connected so I think that bodes well on the ice for us as well.”

Goaltender Karlee Fetch is back to play her fifth-year after an outstanding bronze medal performance in last year’s playoffs. Bachelor of Science Nursing student Madison Fox will share the duties in net, after joining the Queens from the Pacific Steelers of the Junior Women’s Hockey League (JWHL).

“Karlee is really mature in her game and as a person, so I think she will be a very good role model for Madison in terms of prepping for games and being a student-athlete,” says Coulter. “Madison is a very good young goaltender who likes to compete, so it’s a very good tandem.”

Despite the absence of 2018-19 Second Team All-Conference defenceman Catherine Longchamps, the Queens have a solid returning group on the blue line. Victoria Johnston, Kirsten Baumgardt, Sydnee Decorby, Ashley Sutherland and Mariah McKersie are back at RDC. Bachelor of Science Nursing student Shelby Ballan is recovering from a lengthy injury, but will help the team. Joining the defensive corps are Wetaskiwin’s Abby Fonteyne, Glendon’s Brooke Skrypichayko and Spirit River’s Tessa Ross.

“Some of the student-athletes have been more dominant goal scorers on their teams, so we’re hoping that will parlay into this season,” says Coulter. “Character and compete level are common traits that we see with all of our players, which makes us extremely happy.”

Madison Sansom is one of those added offensive weapons. The first-year Open Studies student from Saskatoon recorded 12 goals and 20 assists in 25 games with the Battlefords Sharks of the Saskatchewan Female Midget AAA Hockey League (SFMAAAHL) a season ago. Another talented first-year forward, Carissa Hogan had 12 goals and 13 assists in 28 games with the Swift Current Wildcats, and Coulter views Hogan’s impact extending beyond the ice.

“We are finalizing our leadership group and we have seven girls – Camryn Wallan, Kirsten Baumgardt, Neisha Germann, Victoria Johnston, Sydnee Decorby, Ashley Sutherland and Carissa Hogan, a rookie on our team this year,” says Coulter. “That’s the group that we’re going to be working with, but we are open to adding more as we feel we have a lot of character in our room this year.”

The RDC Queens competed in six exhibition games, picking up three victories and some valuable playing time. The Queens defeated the SAIT Trojans 4-0, the Central Alberta Amazons 2-1 and the Olds College Broncos 3-1.

“Our girls have come in very good shape. The games that we’ve had in the exhibition season, we’ve been very happy with the compete level,” says Coulter. “They are an intelligent young group and are very willing to learn. We are trying to figure out some chemistry and how people play together.”

The Queens dropped a 3-1 decision to the Broncos, 5-2 game to the University of Lethbridge Pronghorns of U Sports, and a very close 1-0 contest to the defending champion MacEwan University Griffins, but they gained important preseason experience.

“The game that we played against MacEwan was a very good game. It had a lot of pace to it back and forth and I was happy that our girls were able to compete at that level,” says Coulter. “I think it helped our girls, especially the rookies, to see the pace and compete levels. MacEwan has been the champions for three years, so they’ve set the bar.”

“That should be a good series right off the bat,” says Camryn Wallan, a third-year forward from Beaverlodge. “We’re going to have to make sure that we use our speed, get pucks to the net and make sure we capitalize on our opportunities.”

After many practices, hours of training and six exhibition games, the RDC Queens are ready to begin the season.

“I’m excited to get started. We had our team builder on August 25 and 26, and we’ve been together for a while,” says Coulter. “All the girls are ready to compete.”

RDC Soccer players snap up athlete of the week honours 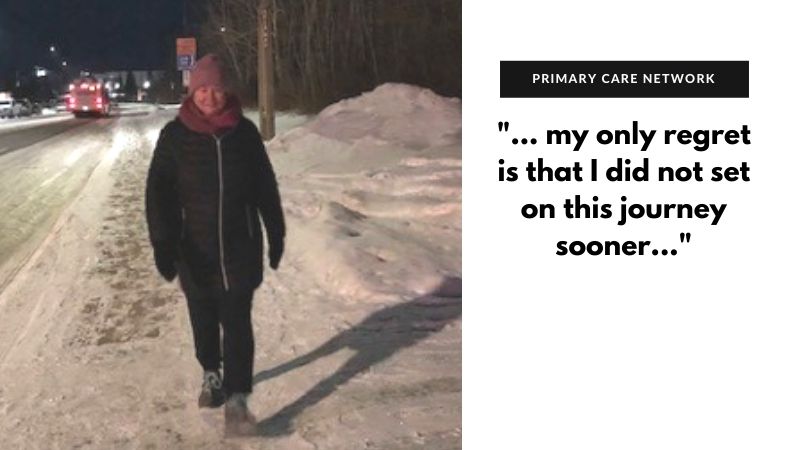 I was diagnosed with Type 2 Diabetes in October 2020. I worked with the RDPCN family nurse to adopted a completely new lifestyle. I decreased my caloric intake, started carb counting, and started walking daily. At first I would walk for 30 minutes a day and now I am up to one hour per day. At times the winter weather has challenged me but I have persevered. Evenings were always family time but I steal an hour for my walking. Fortunately, my family is supportive and at times my daughter or a friend join me and give me motivation.

I have begun to feel lighter and in better shape. I have lost 30 pounds and I have normal blood glucose and blood pressure now. I am still awaiting results of a liver fibroscan. It has taken me a lot of work and willpower to stay the course and I am not done yet. I really feel that I have dodged the bullet. For me a prospect of serious illness, heart attack, liver failure, losing a limb or my family losing me… was petrifying.

So if I were to give advice to anyone who recently got diagnosed with Type 2 diabetes, it would be this: first, make sure you understand what is going to happen if you don’t do anything and then think about the consequences it will have on you and your family, those you love the most. For me that was the biggest motivation. And second advice, find your support system:  family, friends, medical professionals… anyone that will be able to be there for you, give you advice, challenge you and prop you and push you when needed.

I hope someone finds my story inspiring. After all, for years I had used every excuse in the book, not enough time, I cannot give up this or that… until the prospect of getting seriously ill became all too realistic. It is not easy to change one’s ways, but it is more difficult to live with the consequences of the untreated diabetes, or even worse – to not live at all. My only regret is that I did not set on this journey sooner, before any damage was done.

More on provincial update to vaccine passports and restrictions at recreation and cultural centres.

Following the announcement of new public health guidelines on September 15, 2021, The City will implement the Restrictions Exemption Program requiring proof of vaccination, medical exemption or negative rapid test result for visitors and participants at City recreation and culture facilities.

Two exceptions to the REP include; volunteers performing sport-related responsibilities, and youth aged 12-17 participating in activities will not be required to show proof of vaccination, medical exemption or negative COVID-19 rapid test results.

• Anyone ages 18 or older will require will require proof of vaccination, medical exemption or a negative rapid test result within 72 hours of a visit to facilities.

• Volunteers for organized sport groups can enter to perform their sport-related responsibilities without proof of vaccination, exemption, or negative COVID-19 test

• Youth sport, fitness and performance participants can participate in their activities without proof of vaccination, exemption or negative COVID-19 test.

*On Friday, September 17, The City announced that all vaccine-eligible individuals over the age of 12 be required to meet the requirements of the Restriction Exemptions Program.

After further clarity was provided by the Government of Alberta, revisions were made to exclude youth participants ages 12-17 and volunteers from the program.

o Valid test results should be a written or printed copy that clearly outlines the type of test, time of sample collection, clear indication of a negative result, and laboratory that completed the test, if applicable.

o Photos of a rapid test result taken offsite is not sufficient.

o Do not bring completed self-tests or rapid tests to businesses due to communicable disease risk.

• Tests must not be from Alberta Health Services or Alberta Precision Laboratories.

• A valid medical exemption is the original signed letter from a physician or nurse practitioner that includes:

 duration that the exemption is valid

*This information is take from the Government of Alberta COVID-19 website. Please visit their website for the most up to date information.

10.  Are City Staff required to be vaccinated?

For businesses that participate in the Restrictions Exemption Program, vaccinations for staff are not required. At this time, The City does not have a mandatory vaccine policy, but we are reviewing our approach on requiring vaccination for City employees and contractors.

11. Can a parent who is unvaccinated drop their child off for a program or activity?

Yes, if the child is 8 years or older and the parent does not enter the facility.

For children under 8, existing facility requirements remain in place; all visitors under 8 must be accompanied by an adult or someone 16 years or older. This person would need to show proof of vaccination, medical exemption or negative test result. The requirements of the provincial Restriction Exemption Program require all individuals over the age of 12 to be vaccinated in order to access a facility.

For preschool and childminding participants, please contact the program lead for further information.

12. Do I need to be vaccinated to enter a city facility to vote in the upcoming federal election?

The only City-owned polling station is the G.H. Dawe Community Centre. Elections Canada has an exemption from AHS allowing voters to enter polling stations without proof of vaccination. Masks will be required with proof of medical exemption for anyone not able to wear a mask.

13. With the Restrictions Exemption Program temporarily in place at City recreation and culture facilities, will I get a refund on my 2021 taxes or a tax break in 2022?

Property taxes are collected for provision of services to the entire community, the main portion of your property taxes goes towards emergency services, outdoor amenities, police and road maintenance. With the funding that is put towards outdoor amenities every year, we are able to maintain our parks, trails, outdoor courts and rinks that are accessible to anyone for free.