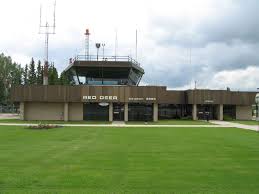 Don’t be alarmed if you see a large amount of emergency services vehicles and personel at the Red Deer Regional Airport on Saturday, November 19th.

Officials with the Airport Authority say they are conducting an emergency exercise from 1:00-4:00pm on airport property and it will involve participation from first responders such as Red Deer County Fire Services, RCMP, Alberta Health Services, as well as various partners from the airport community.

Red Deerians To Ring In The Holiday Season November 19th!

MALAGA, Spain (AP) — Felix Auger-Aliassime fell to his back behind the baseline, then waited for teammates to race off Canada’s bench and pile on top of him.

A few minutes later, the Canadians finally could lift the Davis Cup.

“I think of us all here, we’ve dreamt of this moment,” Auger-Aliassime said.

Canada won the title for the first time on Sunday, beating Australia behind victories from Denis Shapovalov and Auger-Aliassime.

Auger-Aliassime secured the winning point when he downed Alex de Minaur 6-3, 6-4 after Shapovalov opened the day by rolling past Thanasi Kokkinakis 6-2, 6-4.

Seven years after leading Canada to the top of junior tennis, Auger-Aliassime, Shapovalov and their teammates finally got to lift the biggest team trophy in their sport.

“We wanted to grow up and be part of the team and try to help the country win the first title,” Shapovalov said, “so everything is just so surreal right now.”

Shapovalov had dropped both his singles matches this week and needed treatment on his back during a three-set loss Saturday in the semifinals to Lorenzo Sonego of Italy that lasted 3 hours, 15 minutes. But the left-hander moved quickly around the court Sunday, setting up angles to put away winners while racing to a 4-0 lead in the first set.

Auger-Aliassime then finished off his superb second half of the season by completing a perfect week in Spain. He twice had kept the Canadians alive after Shapovalov dropped the opening singles match, and on Saturday he replaced his weary teammate to join Vasek Pospisil for the decisive doubles point.

This time, Auger-Aliassime made sure the doubles match wouldn’t even be necessary. After his teammates poured onto the court to celebrate with him, they got up and danced around in a circle.

Canada had reached the final only once, falling to host Spain in Madrid in 2019, when Rafael Nadal beat Shapovalov for the clinching point after Auger-Aliassime had lost in the opening match.

But with Auger-Aliassime having since surged up the rankings to his current spot at No. 6, the Canadians are a much more formidable team now. They won the ATP Cup in January and finally added the Davis Cup crown to the junior Davis Cup title Auger-Aliassime and Shapovalov led them to in 2015.

Australia was trying for its 29th title and first since current captain Lleyton Hewitt was part of the title-winning team in 2003.

But it was finally time for the Canadians, who were given a wild card into the field when Russia was suspended because of its invasion of Ukraine.

“Look, I think we were very close today,” de Minaur said. “Just wait until the next time we get the same matchup. Hopefully we can get the win and prove that we can do it.”

But Canada will be tough to beat as long as Auger-Aliassime and Shapovalov play.

Shapovalov is just 23 and Auger-Aliassime 22, but both already have been Grand Slam semifinalists and Auger-Aliassime ended 2022 as one of the hottest players on the ATP Tour. He won all of his four titles this year, including three straight weeks in October.

He also beat Carlos Alcaraz in the previous Davis Cup stage in September, just after the Spaniard had won the U.S. Open to rise to No. 1 in the rankings. That victory helped send the Canadians into the quarterfinals, which they started this week by edging Germany.

“They’re not kids anymore, that’s for sure. Not after today — well not after the last couple of years,” said Pospisil, the team veteran at 32. “They’ve been crushing it.”

AL RAYYAN, Qatar — Alphonso Davies scored against Croatia on Sunday to give Canada its first-ever goal at the men’s World Cup.

The goal came 67 seconds into the game.

Canada’s goalkeeper Milan Borjan set up the play with a long goal kick that found Cyle Larin down field.

Larin directed the ball to Tajon Buchanan on the right flank.

Buchanan then sent a cross that found Davies flying through the air and the Bayern Munich star headed the ball past Croatian keeper Dominik Livaković to give Canada a 1-0 lead.

Canada failed to score or secure a point in its first trip to the tournament in 1986, exiting after three first-round losses in Mexico.

Consider that 2,548 goals in total were scored at the 21 previous World Cups, with 132 of those scored at the 1986 tournament. Brazil came to Qatar as the all-time goals leader at the World Cup with 229, having competed at every tournament.

At the other end of the list, Congo (competing as Zaire), China, Indonesia (competing as Dutch East Indies) and Trinidad and Tobago have yet to score at the World Cup.

It looked like Davies was going to end the scoring drought in the 11th minute of Canada’s opener Wednesday against No. 2 Belgium at Ahmad Bin Al Stadium, but his penalty kick was saved by Belgian ‘keeper Thibault Courtois.

The 41st-ranked Canadians ended up losing 1-0 despite outshooting Belgium 21-9 (each team had three shots on target). Forward Jonathan David led Canada with seven attempted shots, none of which hit the mark.

Canada needed to secure at least a point against No. 12 Croatia to keep alive its hopes of making it to the knockout round.

In 1986, the bookmakers laid long odds on Canada getting a goal in Mexico. And they were proved right as the Canadian men lost 1-0 to France and 2-0 to Hungary in their first two outings at the tournament.

Defender Bob Lenarduzzi came close in Canada’s final Group C game at Estadio Sergio Leon Chavez in Irapuato, on a corner against the Soviet Union, only to have the ball squib off his foot in the penalty box. Canada was blanked again, losing 2-0 in its tournament finale.

“It was a terrible effort,” Lenarduzzi recalled prior to the tournament with a laugh.

“To this day I will have people, older people that is, say ‘You cost me a few bucks. If you had scored there, I would have done all right.’ Whoever scores that first goal for Canada _ and someone’s going to do it in Qatar _ they don’t know it, but they should thank me for them having that honour. Because I should have scored.”

Canada has offensive weapons in Qatar. Cyle Larin came into the tournament with a Canadian men’s record 25 goals while David had 22, Lucas Cavallini 18, Junior Hoilett 14 and Davies 12.

Midfielder Jonathan Osorio, who came into Sunday’s matchup with seven Canada goals to his credit, said scoring in Qatar was just a step to a greater goal.

“Of course that will be very special to the country when we get our first goal,” he said prior to the tournament. “You’re going to be remembered forever really. But I don’t think that’s really the focus. The focus is getting the first win. That’s what we’re looking forward to.

“For us it really doesn’t matter who scores as long as somebody does it and we’re able to win the game. I think people are more looking forward to the first win rather than just the first goal.”

The first strike was one of Canada’s first team goals in Qatar, however.