A re-energized Hurricane Dorian rakes the Southeast US coast

Leaving at least 20 people dead in its wake in the devastated Bahamas, Dorian made its way up the Eastern Seaboard, sweeping past Florida on Wednesday at a relatively safe distance. From there, the Category 3 storm apparently grazed Georgia, then hugged the South Carolina coast with more serious effects.

An estimated 3 million people in Florida, Georgia and the Carolinas were warned to evacuate as the storm closed in with the potential for life-threatening storm surge. Navy ships were ordered to ride it out at sea, and military aircraft were moved inland.

At least two deaths were reported on the U.S. mainland, in Florida and North Carolina, both involving men who fell while getting ready for the storm.

The National Hurricane Center’s projected track showed Dorian passing near or over the Outer Banks on Friday, lashing the thin line of islands that stick out from the U.S. coast like a boxer’s chin. Dorian was then expected to peel away from the shoreline.

In an assault that began over Labor Day weekend, Dorian pounded the Bahamas with Category 5 winds up to 185 mph (295 kph), obliterating entire neighbourhoods and triggering a humanitarian crisis. It weakened to a Category 2 before strengthening again late Wednesday.

About 830,000 people were under mandatory evacuation orders on the South Carolina coast alone.

More than 1,500 people sought refuge in 28 shelters in South Carolina, where rain began falling late Wednesday in the historic port city of Charleston, situated on a peninsula that is prone to flooding even from ordinary storms.

As Dorian crept dangerously closer, the wind picked up, sending sheets of rain sideways. Thunder boomed in the night sky, and power flickered on and off. More than two dozen blocks were closed by flooding in the city, where stores and restaurants downtown were boarded up with wood and corrugated metal.

Dorian remained a force to be reckoned with, its swirling circle of winds and rain wrapped around a large, gaping eye visible on photos taken from space.

Hurricane warnings were in effect for the coasts of both South and North Carolina.

Hundreds of shelter animals from coastal South Carolina arrived in Delaware ahead of the storm. The News Journal of Wilmington, Delaware, said 200 were airlifted early Tuesday from shelters in danger of flooding. About 150 more were expected to arrive via land.

Hundreds of thousands of people also were ordered off the Georgia coast. But the mayor of Tybee Island, Georgia, said Dorian inflicted little damage overnight on the small beach community. Jason Buelterman said the storm spared the 3,000 residents from flooding, with high tide about 3 feet lower than predicted.

The lone highway linking the island to Savannah on the mainland remained open throughout the night.

“If the worst that comes out of this is people blame others for calling evacuations, then that’s wonderful,” Buelterman said.

Tybee Islander Bruce Pevey went outside to take photos of unscathed homes to text to neighbours who evacuated. The storm, he said, turned out to be “a bunch of nothing.”

WATERTON, Alta. — Trees are charcoal black on one side and bone white on the other, evidence of the path a wildfire took as it tore into Waterton Lakes National Park in southwestern Alberta nearly two years ago.

“It’s a once-in-a-lifetime opportunity to see the consequences of a natural disturbance event that you would otherwise never see again.”

The wildfire, sparked by a lightning strike in British Columbia, forced everyone out of Waterton on Sept. 8, 2017. Flames breached the park’s boundaries three days later.

Firefighters managed to save the townsite and the historic Prince of Wales hotel, but Parks Canada lost several buildings and the scars of the fire are evident on the blackened mountain slopes.

She says the park has become a “living laboratory” for researchers studying how a powerful wildfire transforms an ecosystem as climate change makes such events more frequent and severe.

“The Kenow wildfire was of exceptional intensity,” she says. “Understanding what’s happening here might be key to understanding what happens in the other post-fire landscapes in the future.”

Already, researchers have encountered some surprises.

Wood-boring beetles which have shown up after past wildfires in the area haven’t in Waterton. Neither have woodpeckers that feed on those bugs.

Researchers are keeping an eye out for any unusual algae blooms caused by higher-than-expected nutrient levels in water.

Pearson says scientists will also be watching to see whether the forest regenerates into its earlier state, or into grassland or another type of ecosystem, since the climate is warmer and drier now than it was when the trees first took root.

Parks Canada is wary of invasive species taking advantage of bare ground exposed by the fire, so hiking trails are equipped with boot-brushing stations to prevent visitors from spreading seeds.

Locals have had mixed feelings about the changed landscape.

Deb Watson, whose family-run trail riding outfit Alpine Stables burned to the ground, says she cries every time she looks at the scorched forest on Crandell Mountain because she knows she’ll never see it green again.

“I don’t like to ride into the back country,” she says. “I don’t want to see it. It just breaks my heart.”

Hotel and restaurant owner Lockey Craig, who lives just outside the park, says it won’t be the same in his lifetime either.

But he’s noticed the views from some of the hiking trails are better now that trees aren’t in the way.

Jordan Wammes — whose family has a bike rental, gas station and treat shop in town — said things were stark during the summer of 2018, but this year was better.

“It was our best wildflower season that I’ve ever seen down here.” 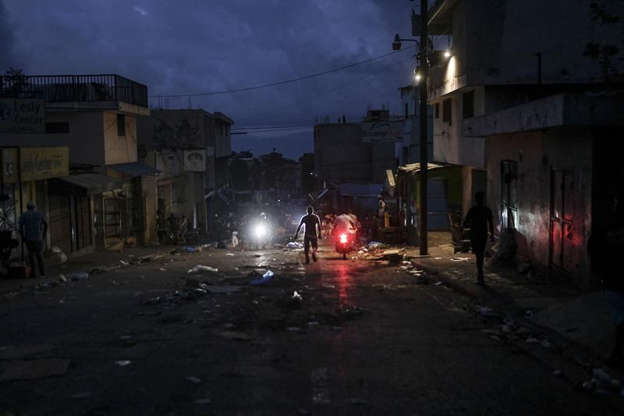