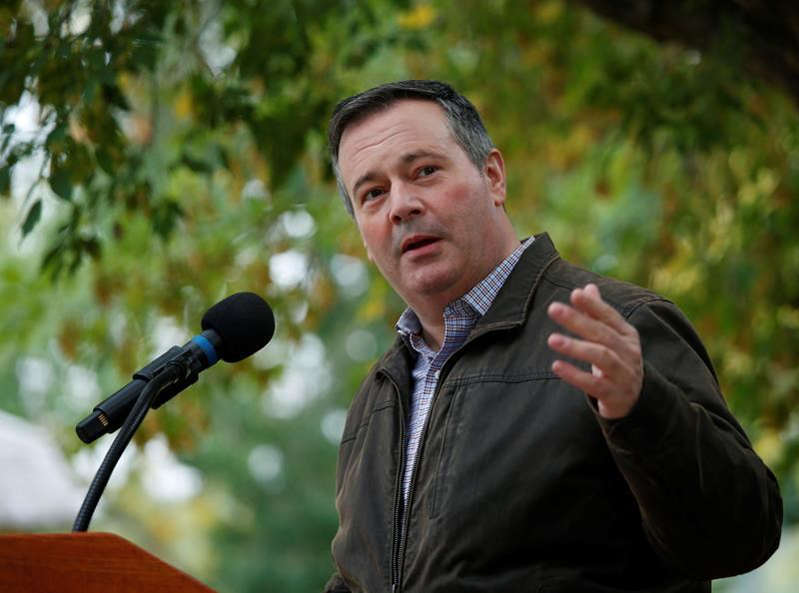 EDMONTON — Simmering internal discontent within Alberta Premier Jason Kenney’s United Conservative caucus has boiled over into an open challenge to his leadership.

Senior backbench member Todd Loewen, in a letter posted on Facebook in the pre-dawn hours Thursday, called on Kenney to resign. Loewen said he no longer has confidence in the premier.

Loewen received a message of support from a second UCP backbencher, Dave Hanson.

In a radio interview, Loewen said he doesn’t want to divide the United Conservative Party, but added volunteers and supporters are bailing out and the UCP is heading for electoral disaster in 2023.

“The people are upset. They are leaving the party,” Loewen told 630 CHED. “We need to do what it takes to stop the bleeding.

“We need to have our constituency associations strong. We’ve got to quit losing board members.

“The majority of people I’m talking to, they want a strong UCP party. But they don’t see that they have that now. We need to have that so we can move forward and be able to form government in 2023.”

In the letter, Loewen accuses Kenney and his government of weak dealings with Ottawa, ignoring caucus members, delivering contradictory messages, and botching critical issues such as negotiations with doctors and a controversy over coal-mining in the Rocky Mountains.

“We did not unite around blind loyalty to one man. And while you promoted unity, it is clear that unity is falling apart,” writes Loewen.

“Many Albertans, including myself, no longer have confidence in your leadership.

“I thank you for your service, but I am asking that you resign so that we can begin to put the province back together again.”

Kenney’s office did not respond to a request for comment.

Loewen is the member for Central Peace-Notley, a sprawling rural constituency in northern Alberta. Hanson represents Bonnyville-Cold Lake-St. Paul in the east.

They were two of 18 UCP backbench members to break with Kenney’s government in April over restrictions aimed at reducing the spread of COVID-19. The group said the rules were needlessly restrictive and infringed on personal freedoms. Sixteen wrote an open letter expressing those concerns.

Kenney has tolerated the open dissension for weeks. He has said he believes in free speech and that backbenchers are not in cabinet and don’t speak for his government.

Loewen is the first to openly break with Kenney.

In his letter, Loewen also resigned as caucus chair. He said he needed to do so to speak his mind but has no intention of leaving the party.

“The caucus dysfunction we are presently experiencing is a direct result of your leadership.”

He said backbench members are sidelined and ignored.

“I no longer believe that caucus can function properly: meetings have been cancelled without members’ consent, significant decisions of government have been made without notice to members, and our input as elected members is rarely considered.”

He said the caucus has tried to be heard but is ignored. And he said when caucus is ignored, their constituents are ignored.

“Our supporters and those I represent can no longer tolerate this. These folks have not abandoned the principles and values of the UCP, but they have abandoned you specifically,” wrote Loewen.

Hanson did not call for Kenney to resign but said in a Facebook post: “Todd, I applaud your courage and stand behind your decision.

“I hear the same thing from our supporters in my area. I along with many of our colleagues share in your frustration. We, along with many Albertans, worked too hard to unite conservatives to hand this province back to the NDP.”

Kenney’s poll numbers have dropped precipitously during the pandemic while those of Rachel Notley’s NDP have climbed.

Kenney, a cabinet member in Stephen Harper’s federal Conservative government, was an architect of the merger of two right-centre Alberta parties — his Progressive Conservatives and the Wildrose party. The United Conservative Party that resulted went on to defeat Notley and the NDP in 2019 to form a majority government.

“Along with so many Albertans, our understanding was that we in the UCP had united around our shared principles, integrity, and common-sense approaches to governing.

There were rumours of a widening internal breach two weeks ago, when Kenney suspended the legislature’s spring sitting. He said it was to keep staff and legislature members safe from COVID-19.

On Wednesday, the government extended the hiatus for another week.

Political scientist Duane Bratt said it looked like Kenney had struck a truce with the dissidents, but the dam appears to be breaking.

“I don’t think (Loewen) is a person coming out on his own,” said Bratt, who is with Mount Royal University in Calgary.

“I think you’re going to hear more coming on the record after this.”

Political scientist Jared Wesley said Kenney has no choice but to turf Loewen from caucus.

“It’s hard to imagine a world in which you can call for your leader’s resignation and still remain a part of caucus,” said Wesley of the University of Alberta.

“The risks of (Kenney) doing that are pretty steep. It would only invite further criticism if not calls for resignation from other MLAs.”

This report by The Canadian Press was first published May 13, 2021. 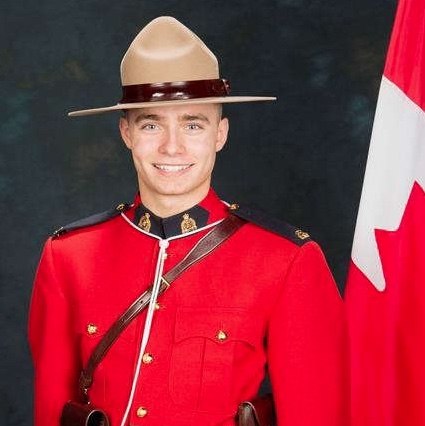 REGINA — Two people accused of killing a Mountie by hitting him with a truck in rural Saskatchewan made their first appearance in court Monday.

Alphonse Stanley Traverse, 41, and Marlene Velma Louise Pagee, 42, have been charged with manslaughter in the weekend death of Const. Shelby Patton.

RCMP have said the 26-year-old officer died Saturday after he stopped a suspected stolen truck in the small town of Wolseley, 95 kilometres east of Regina.

Patton was hit by the truck before it sped off. The officer died at the scene.

Pagee and Traverse were arrested two hours later in a field outside Francis, a town about 80 kilometres southwest of where the officer was killed.

They also face charges of failing to stop after an accident resulting in death as well as of theft of a motor vehicle. Pagee is also charged with possession of a controlled substance.

They appeared in a Regina court in person. Pagee is to be back in court Friday, while Traverse is scheduled for a video appearance on Monday.

Both are from Winnipeg and RCMP have said the truck was stolen in Manitoba. Winnipeg police said they could not provide any information about the investigation.

“The tragic, senseless death of Const. Shelby Patton is being investigated by Saskatchewan RCMP,” Winnipeg police Const. Rob Carver wrote in an email.

Manitoba court records show Traverse and Pagee have been in and out of jail for multiple convictions, including theft and break and enter. In 2006, Pagee was found guilty for operating a motor vehicle while being pursued by police.

Both face outstanding charges in Manitoba for unrelated offences.

Meanwhile, a memorial of flowers continued to grow at the Indian Head detachment where Patton was posted.

He had been a Mountie for just over six years and worked at the detachment since 2015. Before that, he was briefly on assignment at Parliament Hill.

“These messages help us through this difficult time. I would like to thank everyone who took the time to let us know they share our grief,” Blackmore said in a statement. 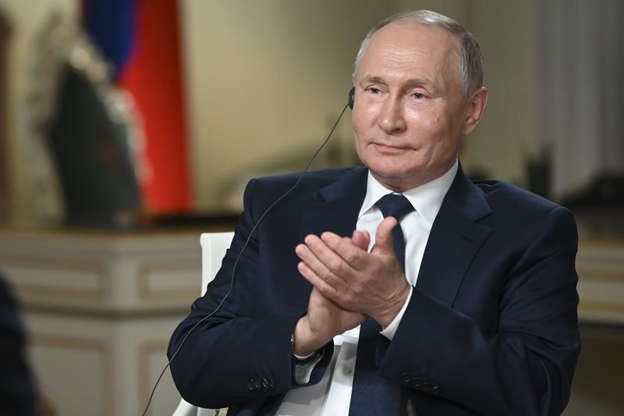 MOSCOW (AP) — Russian President Vladimir Putin, who is to meet President Joe Biden at a summit Wednesday, has suggested that the hundreds of people arrested for rioting at the U.S. Capitol are being subjected to “persecution for political opinions.”

Putin is likely to come under strong criticism from Biden at their meeting in Geneva for moves against his political opponents in Russia, particularly the imprisonment of opposition leader Alexei Navalny, the detention of thousands of demonstrators protesting his arrest, and the outlawing of Navalny’s organizations as extremist.

“You are presenting it as dissent and intolerance toward dissent in Russia. We view it completely differently,” he said in an interview with NBC News broadcast Monday. He then pointed to the Jan. 6 insurrection in Washington when protesters barged into the Capitol to try to halt the count of electoral votes to certify Biden’s election victory over Donald Trump.

“Do you know that 450 individuals were arrested after entering the Congress? … They came there with political demands,” he said.

Although the protests that erupted across Russia after Navalny’s arrest in January were unsanctioned, demonstrators were largely peaceful and did not enter government buildings or cause significant property damage, unlike the Capitol riot.

Putin also reiterated denials that the Kremlin was behind last year’s poisoning of Navalny with a nerve agent that nearly killed him.

“We don’t have this kind of habit, of assassinating anybody,” Putin said.

“Did you order the assassination of the woman who walked into the Congress and who was shot and killed by a policeman?” Putin said, referring to Trump supporter Ashli Babbitt, who was fatally shot by a Capitol Police officer as she tried to climb through a window that led to the House floor.

At a news conference after a NATO summit Monday in Brussels, Biden declined to assess how he’ll measure the success of his meeting with Putin because “the last thing anyone would do is negotiate in front of the world press.”

Biden described Putin as “bright,” “tough” and a “worthy adversary.” But he indicated he would remain wary of any commitments coming out of their meeting, saying he would “verify first and then trust” the Russian leader.

He also suggested he’d be looking for areas of agreement with the Russian president, while also warning him against continued aggression towards the U.S.

“I’m gonna make clear to President Putin that there are areas where we can cooperate, if he chooses, and if he chooses not to cooperate and acts in a way that he has in the past relative to cybersecurity and other activities, then we will respond, we will respond in kind,” he said.

In his NBC interview, Putin sharply dismissed the cyberattack allegations against the U.S. as baseless.

“Where is the evidence? Where is proof? It’s becoming farcical,” Putin said. “We have been accused of all kinds of things — election interference, cyberattacks and so on and so forth — and not once, not once, not one time, did they bother to produce any kind of evidence or proof, just unfounded accusations.”

In May, Microsoft officials said the foreign intelligence service appeared to be linked to an attack on a company providing services to the U.S. Agency for International Development.

At the summit, Biden also is expected to raise the case of two Americans imprisoned in Russia: Paul Whelan, who was convicted of espionage, and Trevor Reed, convicted of assaulting police while drunk. U.S. officials say both were convicted in biased trials on flimsy evidence.

Putin said of Reed, a 29-year-old former Marine: “He’s just a drunk and a troublemaker.”

Putin brushed off one possible source of tension in the upcoming summit: Biden’s claim that he once told Putin he considered the Russian leader soulless.

“I do not remember this particular part of our conversations,” Putin said.