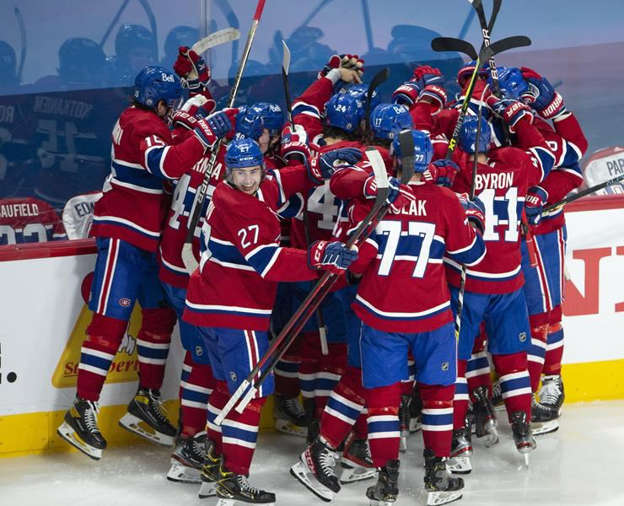 LAS VEGAS — A difficult challenge awaits the Montreal Canadiens tonight as they enter their Stanley Cup semifinal as underdogs against the host Vegas Golden Knights.

The top-ranked Golden Knights won an NHL-best 40 games in the shortened 56-game regular season and tied Colorado for the highest point total in the league – 23 points more than Montreal in the standings.

But the Canadiens have been in this position twice already this post-season.

They were not expected to beat the division-leading Toronto Maple Leafs in the opening round, nor were they favoured to overcome the third-place Winnipeg Jets in the second round. The team silenced critics in both cases and are riding a seven-game win streak that includes a sweep of the Jets.

It’s not all familiar territory for the Habs, though.

The Montreal-Vegas series is the first cross-border matchup in the NHL this season, made possible by a federal exemption allowing teams to bypass 14-day quarantine requirements.

The Canadiens will also need to overcome the roar of roughly 18,000 fans inside Vegas’ T-Mobile Arena – a stark contrast from the empty Canadian arenas during the regular season and even the 2,500 fans permitted inside Montreal’s Bell Centre during the playoffs.

More from this author
Top Story CP / 8 hours ago

EDMONTON — A judge has sentenced an Ontario truck driver to 12 1/2 years in prison for killing a woman in his Edmonton hotel room a decade ago.

Court of Queen’s Bench Justice Stephen Hillier said Bradley Barton will get credit for the days he has already spent in custody, so about 11 years remain in his sentence.

A jury found Barton guilty in February of manslaughter in the death of Cindy Gladue, a 36-year-old Métis and Cree woman who bled to death at the Yellowhead Inn in June 2011.

Medical experts testified the mother of three had four times the legal limit of alcohol in her system when she was left bleeding in a bathtub.

Crown prosecutors argued that while Gladue was passed out, Barton performed a sexual act that caused a severe wound to her vagina, then dumped her in the tub and left her to die.

Barton, 53, testified that he had arranged to pay Gladue for sex and was shocked when he woke in the morning to find her dead and covered in blood in the tub.

Hillier said he rejected what he called the self-serving stories Barton told at his trial to avoid responsibility for the aggressive sexual assault that killed Gladue.

“No words can capture the tragedy and sorrow, particularly for the young family left suddenly without a mother,” Hillier said.

Crown prosecutors had recommended Barton be sentenced to between 18 and 20 years. The defence suggested no more than nine years, saying the Crown did not prove beyond a reasonable doubt that Barton intended to kill Gladue.

The judge said there is no sentence that will bring Gladue back or undo the intergenerational trauma the woman’s death has caused her family.

Outside the courthouse, Gladue’s daughter Cheyanne Gladue said justice has been served but the heartache for the family lives on.

She said the family was finally able to bury Gladue last week in northern Alberta.

“We took her home to Athabasca to be home,” McLeod said. “I’d like to thank everyone across Canada all over who supported us. I’m glad to see this all over.”

It was the second trial for Barton.

A jury found him not guilty in 2015 of first-degree murder, which sparked rallies and calls for justice for Indigenous women.

There was also outrage as Gladue’s preserved vaginal tissue was presented in court during the first trial. She was also repeatedly referred to as a “native” and a “prostitute.”

The Alberta Court of Appeal and later the Supreme Court of Canada ordered a new trial.

Charron, from Rimouski, Que., finished first in the women’s 64-kilogram competition after a successful lift of 131 kilograms on her third and final clean and jerk attempt.

Charron also had the highest score in the snatch phase, lifting 105 kilograms. Her total of 236 points over the two phases was four better than silver medallist Giorgia Bordignon of Italy.

Charron’s gold is Canada’s second of the games after swimmer Maggie Mac Neil won the women’s 100-metre butterfly on Monday.