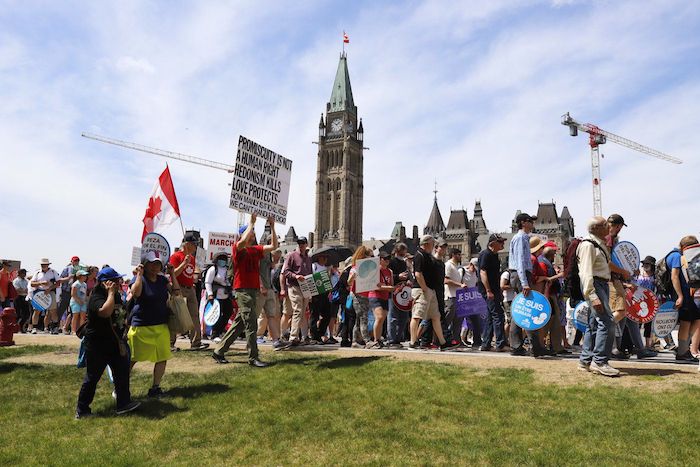 By Erika Ibrahim in Ottawa

Thousands of anti-abortion demonstrators descended on Parliament Hill Thursday, as a leaked U.S. Supreme Court decision brings renewed attention to the issue on both sides of the border.

“How about that Roe v. Wade decision? Are you stoked? I am,” said Jeff Gunnarson, national president of anti-abortion group Canadian Life Coalition.

Gunnarson spoke to the crowd, referencing the leaked draft decision to overturn the landmark case in the U.S. on abortion rights.

“They’re not. They’re nervous,” he said, gesturing to the dozens of abortion rights advocates who counter-protested at the margins of the rally.

James Schadenberg said while he would have come out to the rally regardless, he hopes the leaked decision will bring encourage Canada’s politicians to bring a law to prevent abortion and “protect the right to life.”

Fellow anti-abortion protester Valerie Luetke said the situations in Canada and the U.S. are “certainly different.”

“They’re trying to strike down the Roe v. Wade abortion law in the States. But here we don’t have a law, so we’re trying to build a law. So it’s definitely different circumstances.”

Meanwhile, counter-demonstrators carried placards reading “abortion is health care” and “keep your laws off my body.”

Jaisie Walker, executive director for Planned Parenthood Ottawa, said her organization wanted to make sure its presence was extra powerful this year.

“Our goal for the day is to build solidarity amongst the folks who come here today,” said Walker, adding her group was there to share information and “support reproductive justice.”

Attendees in religious attire were present at the March for Life rally and many speakers made references to Christianity.

“Life is very important. It’s a gift from God, the life we have,” said Gaetana Nicola, who said she has been coming to the annual rally for a long time.

Ottawa police advised those travelling downtown Thursday to expect traffic disruptions, and notify they would carry out rolling road closures ahead of the demonstration.

Vehicles are still not allowed on Wellington Street between Bank Street and Elgin Street, after the “Freedom Convoy” protest that gridlocked downtown Ottawa for several weeks in February.

This report by The Canadian Press was first published May 12, 2022.

Battle for the base: What Conservatives think of Lewis – in a race against Poilievre

Police: Texas gunman was inside the school for over an hour

The CFL and CFL Players’ Association have reached another tentative agreement.

According to a league source, the two sides hammered out a second agreement in principle Thursday, two days after CFL commissioner Randy Ambrosie unveiled the league’s final offer to its players.

The source spoke on the condition of anonymity as neither the CFL nor the CFLPA have confirmed the deal.

The new agreement is pending ratification by both the CFL Players’ Association membership and league’s board of governors. According to two sources, the players will vote on the deal Thursday night.

Time is of the essence as the CFL exhibition schedule is slated to kick off Friday night with two games.

On Monday, the players voted against a tentative deal that the union had recommend they accept. The CFLPA is also recommending acceptance of Thursday’s tentative agreement.

The Canadian ratio will remain at 21 on the roster and seven starters for this season. Teams will be able to rotate two nationalized Canadians — Americans who’ve spent either four years in the CFL or at least three with the same team — in 2023 for up to 49 per cent of snaps on either side of the ball.

Teams can move to three nationalized Canadians in 2024 but the two franchises that play the most Canadians at the end of the season will receive additional draft picks.

The CFL will also provide $1.25 million in a ratification pool for players.

The two sides had been at odds regarding the Canadian ratio.

Last Wednesday, the CFL and CFLPA reached a tentative seven-year agreement, ending a four-day strike by seven of the league’s nine teams. At first glance, there seemed to be many positives for the players, including a revenue-sharing model the ability to reopen the pact in five years once the CFL signed a new broadcast deal and veteran players having the ability to negotiate partially guaranteed contracts.

But the agreement also called for CFL teams to increase the number of Canadian starters from seven to eight. The extra would be a nationalized Canadian.

In addition, three other nationalized Canadians could play up to 49 per cent of all snaps on either side of the ball. And the deal also didn’t include a ratification bonus.

And despite a recommendation to accept from the union, the players voted against ratifying the deal.

Not only did Ambrosie say it was the CFL’s final offer, but it was good until midnight ET on Thursday, given the league’s exhibition schedule was slated to begin Friday night with two games. Ambrosie added if the players rejected the offer and opted to go back on strike, they’d be served notice to vacate their respective training-camp facilities.

It marked the second time Ambrosie had gone public with a final contract offer to the CFLPA. On May 14, he posted a letter to fans on the league’s website detailing the league’s proposal to players hours before the former CBA was set to expire.

The next day, players on seven CFL teams opted against reporting to training camp and went on strike. The Edmonton Elks and Calgary Stampeders both opened camp as schedule because they weren’t in a legal strike position, as per provincial labour laws, at the time.

It marked just the second work stoppage in league history and first since 1974.

This report by The Canadian Press was first published May 24.

Dr. Luc Boileau says there are now 25 confirmed cases of the disease in the province and about 30 suspected cases are under investigation.

He says the province has received supplies of smallpox vaccine from the federal government, and it will be administered to people who have been in close contact with confirmed cases of the disease.

She says the disease is transmitted only through prolonged close contact.

Boileau says the majority of cases are in adult men who have been in sexual contact with people who have the disease, and there has been one case in a person under 18.