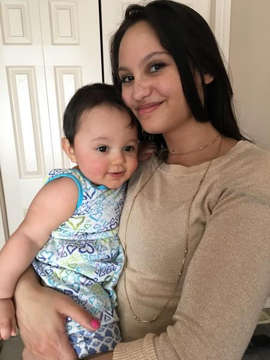 CALGARY — A man admitted to killing a Calgary mother at the beginning of his murder trial Tuesday but says he’s not guilty in the death of her toddler.

In April 2019, two weeks before her 26th birthday, Lovett and her daughter were reported missing after they failed to show up for a dinner.

They were last seen alive on a grocery store video on April 15.

Their bodies were found three weeks later near Grizzly Creek, a day use area in Kananaskis Country west of Calgary.

Leeming, 36, is a British citizen who had been in a relationship with Lovett.

Crown Prosecutor Doug Taylor read out an agreed statement of facts that said that Lovett and Leeming met on a dating app in September 2018. She and her daughter moved in with Leeming a month later. They were living as “boyfriend and girlfriend,” even though Lovett paid him expenses and rent.

“After 4 1/2 hours, the accused led the undercover police officers to the bodies of both Jasmine Lovett and Aliyah Sanderson,” Taylor said.

“Their bodies were found buried in shallow graves, under brush, branches and mulch in a wooded area in Kananaskis Country near Fortress Junction Service.”

An autopsy showed Lovett died as a result of multiple injuries — including blunt force trauma to her head. Her daughter’s cause of death was blunt force injuries.

The trial is proceeding on the sole charge of second-degree murder in the death of Aliyah. It is scheduled for 19 days.

“The accused admits that he murdered Jasmine Lovett yet he maintains that he did not murder 22-month-old Aliyah Sanderson,” Taylor said.

“The prosecution respectfully suggests that once all of the evidence is heard and considered in this case, there can be no doubt whatsoever that the accused, Robert Andrew Leeming, murdered Aliyah too.”

Jenavie Lovett testified that her sister and Leeming had an up-and-down relationship and she believed they were moving too fast.

“I was concerned because Jasmine said she was going to move in with Robert, despite only having known him for a few weeks to a month. Naturally, as a sister I had my concerns,” she said.

“It was very strange. It’s like emotionally it wasn’t quite on the level that you’d think a relationship would be. I know Jasmine talked about having some issues in getting Robert to open up.”

The couple broke up at one point, she said. Lovett said her sister sent her a text message that said:”It’s not working out and I’m not happy.” But they remained in the same home and eventually got back together.

“He would cook for her. He would put Aliyah to bed. He would watch Aliyah if Jasmine had to leave the house,” she said.

This report by The Canadian Press was first published Oct. 12, 2021.

More from this author
Top Story CP / 40 mins ago

But Dr. Deena Hinshaw cautions that the hospital situation remains precarious given the high number of patients.

And she says Albertans can’t afford to let up on health restrictions, particularly with Halloween coming up.

There were eight more deaths, bringing that total to 3,014.

Alberta Health Services says there are 912 people in hospital with COVID-19, and that 201 of them are in intensive care.

Alberta remains under gathering restrictions for indoor and outdoor events, and Hinshaw says it’s important to stick to those limits at Halloween.

Hinshaw urged those setting out candy for trick or treaters to not use bowls, but to set out the candy spaced apart on a surface like a blanket.

She says those who want to have a Halloween party should consider a small gathering of vaccinated people.

“This is not the year for large Halloween parties,” Hinshaw said.

“If you’re planning a Halloween gathering try to have it outdoors and make sure the limit of no more than 20 people is observed.”

Hinshaw noted that last Oct. 31 there were 5,600 active COVID-19 cases, about half the current total. There were 141 people in hospital with the illness a year ago.

Alberta continues to battle a fourth wave of the pandemic.

It has more than doubled the normal number of 173 critical care beds and has had to cancel thousands of non-urgent surgeries to handle the surge.

“All people deserve to live in dignity and have a safe place to call home,” said Notley. “These calls are urgent. It’s getting cold outside, and our northern winter will be here soon.”