At 4 pm on September 16, RCMP responded to a report of a stolen SUV at a 67 Street business. RCMP located the SUV and arrested the three occupants as they exited the business. The female, who had been identified as the driver, gave police a false name but her identity was soon confirmed. RCMP seized identity documents and what is believed to be methamphetamine.

At the time of her arrest, 25 year old Madison Coutre was wanted on warrants for assault, failing comply, and failing to attend court. She now faces the following additional charges:

The two male passengers, 43 year old Marty Roy and 33 year old Kleedis Lagrelle, were both arrested on outstanding warrants out of Calgary. The vehicle was reported stolen out of Red Deer on September 15 during a garage break and enter; the vehicle keys and a wallet containing cash and bank cards were stolen from the garage.

Around noon on September 14, RCMP responded to a report of suspicious activity in downtown Red Deer and located 35 year old Amanda Hadiken, who was wanted on nine outstanding warrants for theft (X 2), fail to comply with an undertaking or conditions (X 4), fail to appear in court (X 2) and breach of conditions. A court date has not yet been set.

Shortly before 3 am on September 13, RCMP responded to a report of a break and enter in progress at a downtown business; RCMP located the suspect nearby and arrested him without incident.

At 4 am on September 12, RCMP on foot patrol in downtown Red Deer located a suspect who was wanted on a warrant for assault. In the course of his arrest, RCMP seized pills and what is believed to be fentanyl.

In addition to his warrant, 46 year old Wessam Haimour faces two charges of possession of a controlled substance.

At 7 am on September 11, RCMP responded to a report of a suspicious vehicle parked in a residential area in Oriole Park and located a man and a woman occupying a stolen vehicle that contained a number of stolen items, including electronics and identification documents.

39 year old Jason Gregory was wanted on warrants out of Strathcona area and Edmonton at the time of his arrest; he now faces charges of illegal possession or trafficking in government documents and possession of stolen property under $5,000 X 2

Shortly before 5 pm on September 10, RCMP responded to a report of shoplifting in progress at a south Red Deer store. The suspect was gone when police arrived, but was quickly identified through surveillance. RCMP located the suspect on September 11 and arrested him without incident.

At 1:30 pm on September 10, RCMP on patrol in downtown Red Deer conducted a traffic stop and located a woman who was wanted on 10 outstanding warrants out of Edmonton for fail to attend court (X 6), assault, obstruct/ resist peace officer, identity fraud and theft under $5,000. At the time of her arrest, she was in possession of stolen identification documents.

In addition to her warrants, 28 year old Adut Garang faces a charge of illegal possession or trafficking in government documents.

More from this author
Uncategorized / 1 year ago 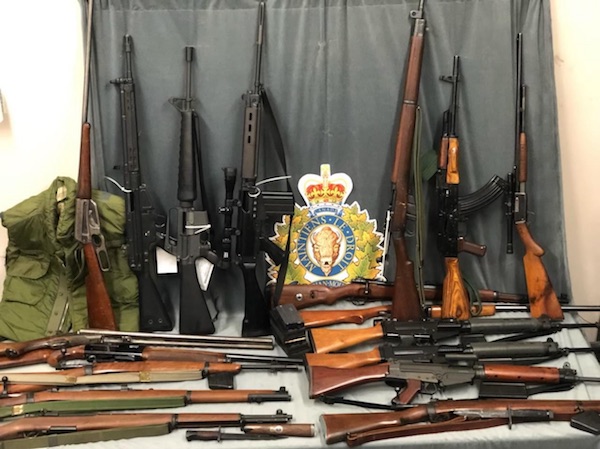 At approximately 5 a.m. on Nov. 30, 2021, Innisfail RCMP observed a subject known to police to violate his court-imposed conditions by leaving his residence in Penhold, Alta., and depart in a vehicle.

With the assistance of Blackfalds RCMP, a traffic stop was conducted on Highway 2A leaving Penhold. Three occupants in the vehicle were located in possession of two firearms. The vehicle and firearms were seized and the occupants, two males and one female, were arrested.

Search warrants were obtained and executed by Innisfail RCMP at the residence in Penhold as well as on the seized vehicle with the assistance from the Southern Alberta Crime Reduction Unit (SACRU), Forensic Identification Section (FIS), and the National Weapons Enforcement Support Team (NWEST) along with Blackfalds and Innisfail ITU

A total of 21 prohibited and non restricted firearms were seized, along with silver coins, collectable currency and suspected methamphetamine and drug paraphernalia.

Jordan Glasgow (21) from Penhold, Casey Laprise (33) of no fixed address, and Amber Parfitt (37) from Olds, Alta., have been jointly charged with numerous offences:

Jordan Glasgow and Amber Parfitt have been jointly charged with:

Jordan Glasgow has also been charged with:

Amber Parfitt has also been charged with:

Casey Laprise has also been charged with:

After a judicial hearing, all three accused were remanded to custody. Casey Laprise and Amber Parfitt will next be appearing on Dec. 9, 2021, and Jordan Glasgow on Dec. 12, 2021, in Red Deer Provincial Court.

Innisfail RCMP General Investigative Section believe the firearms seized are related to a recent Break and Enter in Innisfail and are continuing to investigate.

Innisfail RCMP are encouraging the community to report criminal or suspicious activity when it is observed as too often incidents are reported long after the incident. Reports tell us where to look, who to look for, and where to patrol in the future. If you see a crime in progress, dial 911. If you wish to remain anonymous, contact Crime Stoppers at 1-800-222-8477 (TIPS), online at www.P3Tips.com or by using the “P3 Tips” app available through the Apple App or Google Play Store.