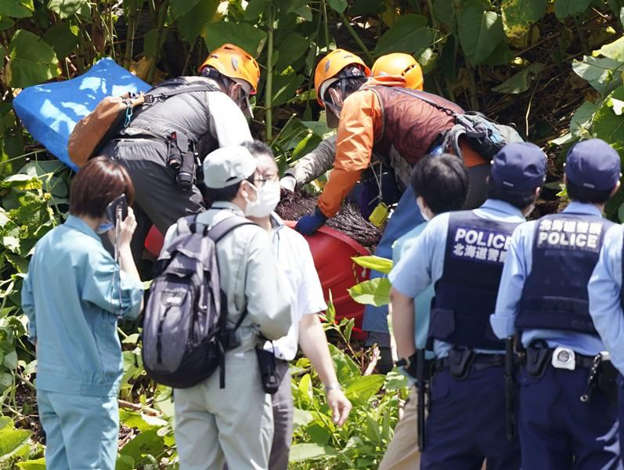 TOKYO (AP) — A wild brown bear on the the loose all night in a city in northern Japan wounded four people, entered a military camp and disrupted flights at an airport Friday before being shot and killed by authorities.

The bear was seen wandering through the streets of Sapporo in the early hours of Friday, triggering a number of calls to police. Over the next eight hours, Hokkaido prefectural police said the bear injured a woman in her 80s, a man in his 70s and a man in his 40s before attacking a soldier.

Police said the condition of those injured was not known, but the Asahi newspaper reported that the man in his 40s suffered serious injuries to his chest, back and limbs after he was mauled by the bear while walking on the street.

Footage on local television showed the bear wandering a street in Sapporo. Chased by a car, it crossed a busy road and forced its way into the Ground Self-Defense Force’s Camp Okadama. The bear knocked down a uniformed soldier on duty at the gate.

The soldier suffered cuts to his chest and stomach, but his injuries were not life threatening, according to the Defense Ministry.

Next the bear ran through the camp and intruded onto the runway at a nearby airport, causing several flights to be grounded.

The bear then ran into a forest, where it was shot by local hunters.

Toshihiro Hamada, an official at Sapporo city environmental department, said the bear’s presence in town was a surprise and officials were investigating how the animal ended up in town.

“We are sorry that four people were injured,” Hamada said.

Brown bears roam mainly in Hokkaido forests, but experts say they have been increasingly spotted in inhabited areas looking for food, especially during the summer.

TOKYO — Canada has its first rowing medal at the Tokyo Olympics.

Victoria’s Caileigh Filmer and Hillary Janssens of Surrey, B.C., took bronze on Thursday in the women’s pair with a time of six minutes 52.10 seconds.

The 2018 world champions finished behind the gold-medal winning duo of Grace Prendergast and Kerri Gowler of New Zealand (6:50.19) and the Russian Olympic Committee’s Vasilisa Stepanova and Elena Oriabinskaia (6:51.45).

Conlin McCabe of Brockville, Ont., and Kai Langerfeld of North Vancouver, B.C., were the other Canadian rowers in a final Thursday, finishing fourth in the men’s pair on the 2,000-metre course at Sea Forest Waterway.

Canada’s women’s eight will race for a gold Friday.

The country’s rowers are looking to rebound after a disastrous showing at the 2016 Rio Games that saw the program secure just one medal.

The Canadians qualified 10 boats for Tokyo — the most since the 1996 Olympics in Atlanta — and have a gender-neutral team for the first time in their history.