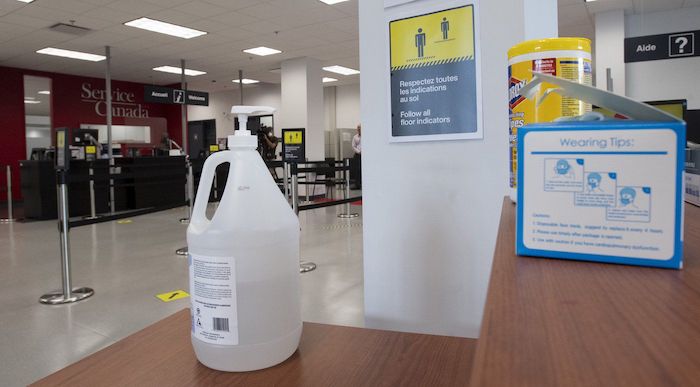 Provinces are awash with expired hand sanitizer that Ottawa sent them during the height of the COVID-19 pandemic.

The federal government spent $376 million to get more than 20 million litres of hand sanitizer, which the Public Health Agency of Canada distributed.

But now, most provinces have excess expired sanitizer and getting rid of it through disposal or repurposing comes with a hefty cost.

Saskatchewan is expecting to spend $100,000 to get rid of more than 350,000 litres of hand sanitizer that’s sitting in a Regina warehouse and Manitoba spent more than $462,000 to repurpose its extra sanitizer.

Both provinces say they received more sanitizer from Ottawa than was necessary during the pandemic because they’d procured their own supply.

Saskatchewan Opposition NDP Leader Carla Beck says provincial governments should have considered distributing the excess to non-profits, community organizations and others who were running short of supplies.

This report by The Canadian Press was first published Jan. 11, 2023.

In his video presentation Monday, British Health Researcher Dr. John Campbell took a break from his daily dive into the data. Instead he highlighted a breaking news story in the UK about a secret military operation.

A former member of the “77th Brigade” told Britain’s Daily Mail he was brought in to serve on the unit during the pandemic. Although their official task was to uncover foreign interference, the whistleblower says they spent their time monitoring “our own concerned citizens” who were criticizing lockdown policies and other government responses to the pandemic.

While there may have actually been some foreign social media campaigns attempting to sway opinions in Britain, the 77th Brigade instead “compiled dossiers on public figures such as ex-Minister David Davis”, as well as journalists Peter Hitchens and Toby Young.

The information compiled by the 77th Bridage was “reported back to No 10.” The whistleblower says government ministers then pushed social media platforms to remove or downplay this information and “promote Government-approved lines.”

This is all very disconcerting for Dr. Campbell who has found some of his own posts during the pandemic have been deleted.  Campbell finds the government’s effort to thwart a healthy learning environment extremely disturbing.

The 77th Brigade is part of the British Army

77th Brigade is an agent of change; through targeted Information Activity and Outreach we contribute to the success of military objectives

Up front I would say that our role has been entirely in support of the heroic health care workers on the front line, with humility being very much our watchword in how we give that support.

The 77th Brigade, specialist to counter disinformation, and other online activity deemed harmful to the UK, assisted other government units Such as The Counter Disinformation Unit, was part of the Department for Digital, Culture, Media & Sport (DCMS)

Mail on Sunday (whistleblower) It is quite obvious that our activities resulted in the monitoring of the UK population … monitoring the social media posts of ordinary, scared people These posts did not contain information that was untrue or co-ordinated – it was simply fear I developed the impression the Government were more interested in protecting the success of their policies than uncovering any potential foreign interference

Online disinformation is a serious threat to the UK, which is why during the pandemic we brought together expertise from across Government to monitor disinformation about Covid. They did not target individuals or take any action that could impact anyone’s ability to discuss and debate issues freely.

They compiled dossiers on public figures, such as ex-Minister David Davis, who questioned the modelling behind alarming death toll predictions, as well as journalists such as Peter Hitchens and Toby Young.

Their dissenting views were then reported back to No 10.

Questioned the waste of public money.

From the National Citizen’s Inquiry

The National Citizen’s Inquiry (NCI) – a citizen-led inquiry into Canada’s response to COVID-19 – is finalizing plans to hold hearings across the country. With two of five commissioners now in place, the inquiry has booked its first two events – in Atlantic Canada and Central Canada.

Across the country, we are seeing more and more clear signals that Canadians are not only ready to ask the hard questions about how our governments reacted to this pandemic, but also require the answers.

In fact, after two years of vaccine distribution, the state broadcaster this week also published one of its first articles chronicling widespread vaccine injuries. The article acknowledged that those suffering from adverse effects also deal with “silence” and “stigma” as a result of the overly politicized tone set by Ottawa.

In Ontario, 164 former health care workers rallied to let the public know that, while the provincial health care system buckles under immense pressure and nurses are shipped in from other parts of Canada, there are hundreds of workers that were terminated because of vaccination mandates – and to the surprise of most – they are still not permitted to resume their careers.

In Alberta, Premier Danielle Smith has commissioned a Public Health Emergencies Governance Review Panel which will “review the legislation that guided Alberta’s response to COVID-19 and recommend changes to improve the handling of future public health emergencies for Albertans.”

On that note, Preston Manning will be stepping away from his role as spokesperson for the NCI to chair the Alberta review. The NCI welcomes this positive initiative by Premier Smith and believes the people of Alberta will be well-served by the appointment of Mr. Manning as Chair. Taking over for Manning is acclaimed investigative journalist Trish Wood. Wood worked for 10 years on CBC’s Emmy Award-winning Fifth Estate before exposing the heartbreaking stories of Iraq War veterans in What Was Asked of Us and later pioneering the modern renaissance of true-crime storytelling. This experience has allowed her to hone the kind of unapologetic critical thinking and investigative skills that she will bring to bear in this role.

Plans for the Inquiry’s in-person hearings – supplemented by virtual participation – are now being finalized. The first hearings will be in Atlantic Canada e.g. Truro/Nova Scotia, March 16,17,18 and Montreal/Quebec, 22, 23, and 24 of March.

Additionally, the Inquiry has appointed its first two commissioners. They are Bernard Massie and Ken Drysdale.

Invitations will soon be sent to government officials at all levels across the country. These individuals will be invited to provide their perspectives and reflect on the decisions that were made.

Invitations are also extended to experts in the areas of economics; health care; mental and physical wellbeing; constitutional expertise; learning; and any other area significantly affected by pandemic response at any level. The Inquiry is also welcoming non-experts with personal stories that will help illuminate any unarticulated and overlooked shortcomings in the government responses. As demonstrated in the article reference above, there are many Canadians who feel silenced and stigmatized.

Take the example of Christian and Margarita

Immigrants from Mexico, they chose to start a life and a family here in Canada. Christian holds a PhD and was a lecturer at a prominent Canadian university. His wife was a program manager for a regional health authority.

After soberly considering their risk profile against the available data, as well as suspecting that the mRNA vaccination was incompatible with aspects of their faith, they chose to wait.

And in their situation, we see the unfortunate cascading effects of these poorly considered policies, developed in bureaucratic silos.

Christian and his wife – who worked from home, incidentally – were both put on indefinite administrative leave by their employers. Both streams of household income effectively removed.

And because of the Federal government’s policies, they were also deemed ineligible for any employment insurance.

Being immigrants, they also did not have family around them. In fact, their main community connections were from a church they attended. Unfortunately, they were also no longer allowed to attend worship services because of the imposition of the vaccine passport program by the provincial government.

At the time this happened, Christian and Margarita were also living on an island. Federal travel mandates left them effectively stranded.

In the span of a month, these highly skilled individuals – who had made Canada their new home – lost all income; were disqualified from any social assistance; lost their primary community support system; and could not even get on a plane to leave.

Now Christian and Margarita are in the process of returning to Mexico, where they have more confidence that the government will leave them in peace.

About the National Citizen’s Inquiry

NCI is a citizen-led and citizen-funded initiative that is completely independent from government. In early 2023, the NCI will hear from Canadians and experts and investigate governments’ COVID-19 policies in a fair and impartial manner. The NCI’s purpose is to listen, to learn, and to recommend. What went right? What went wrong? How can Canadians and our governments better react to national crises in the future in a manner that balances the interests of all members of our society?