OTTAWA — The union representing Canada’s diplomatic corps says it has filed a request to go to arbitration with the federal government after the two sides couldn’t agree on a new contract late last month.

The Professional Association of Foreign Service Officers declared an impasse in negotiations with Treasury Board officials on Feb. 21 after nine months of talks.

The association says its 1,600 members have been without a contract since last July 1.

The group filed a request for binding arbitration through the Public Service Labour Relations Board listing a range of issues still on the table, including “proper access” to required medications for those serving abroad, adherence to workplace health-and-safety laws, better harassment protections for foreign-service workers, and having the government pay diplomats quickly despite the government’s buggy Phoenix pay system.

The association says in a release that federal negotiators appeared unwilling to make “any reasonable concessions.”

In 2013, the foreign-service union went on strike after being without a contract for about two years.

A new agreement was finally signed in June 2018, just days before it was set to expire and the latest round of negotiations began.

The government says it remains open to continuing good-faith discussions with the association.

A spokesman for Carla Qualtrough, the interim Treasury Board president, said the government is committed to the collective-bargaining process and will respect any decision the labour-relations board makes.

More from this author
Top Story CP / 26 mins ago 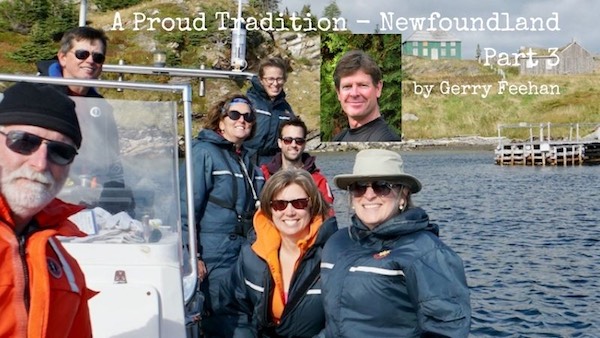 This is the third of four parts in the Newfoundland series. Scroll down to find Part 1, Gros Morne, and part 2 North America’s Oldest European Settlement

If Newfoundlanders weren’t so damn friendly we’d have been on time for our Jiggs dinner.

Terra Nova National Park is situated in eastern Newfoundland, 399 sq km of rugged rock, trees and wetland, wrapped around idyllic fingers of Bonavista Bay. The Trans-Canada highway bisects the park, then continues southeast toward Come by Chance and eventually the capital, St. John’s, on the Avalon Peninsula. It was early October. Terra Nova was still open for business, but quiet, so we had our choice of primo campsites. As we checked in I grabbed a bag of firewood. It was going to be a cold night, with frost expected. The ranger stopped me, “No sense you paying for wood. The folks in site 17 just bought a big load. Just go over and join them when the fire starts.”

And so we did. And that’s how we met Burkey and Bev. Even before we reached their roaring fire, Burkey spotted us timidly approaching from the shadows, and without a word, pulled out spare chairs and began pouring drinks. It was Thursday before Thanksgiving. The Burkes were setting up camp, preparing for the arrival of friends and family, and prepping for the big occasion: Sunday’s Jiggs dinner. After a fun evening of chatter (interspersed with a few tunes from my ever-present ukulele) we rose to bid adieu. “You’ll come for dinner Sunday?” asked Barb. I did some quick calculating. We had a week left on The Rock but had yet to visit St. John’s. Plus there was the Irish Loop and Bonavista Peninsula to explore. And we had a long drive back west to Port Aux Basque, almost 1000km, in order to catch the ferry on Tuesday.

On Sunday we awoke to a gorgeous morning at the Cabot Highway RV Park, a few kilometers from the town of Trinity, on Bonavista Peninsula. (The intervening 3 days and our St John’s/Avalon/Irish Loop drive will be recounted in the fourth and final yarn of this series.) When we reached Trinity I headed straight through town, bound for the local pier, as I am wont to do. Preoccupied by the brightly painted clapboard homes, 19th century church spires and scenic fishing stages (houses hanging over the water used for cleaning cod), I failed to observe that the roadway was becoming dangerously narrow.

We ended up trapped on the town boat ramp, pointed seaward. There was no way to turn the motorhome around. Florence was starting in on my (justly-deserved) beratement when a boat pulled up to the wharf. “What are you after doing down there, b’y?” asked the operator with an amused look. With his guidance I was able to slowly reverse position and get the RV pointed away from the slippery slope and safely back toward land. I offered my thanks. “No trouble,” said he, bobbing in his boat. “I’m taking friends out for a tour of the bay this lovely morning. Would you and your wife like to join us?” I did some more calculating. It was a two-hour drive back to Terra Nova. Jiggs dinner was at 3pm. “We’d need to be back to shore by 1pm,” I said. “No worries,” he replied, “I’ll have you at the dock by noon at the latest.”

It was a fantastic outing. Skipper Bob and his partner Bonnie run www.trinityecotours.com. The tourist season was almost over and the day’s trip was just for fun. Although the usual fare is $90 a person, they refused to take our money. We followed the rugged coastline, where the remains of the ancient Appalachian Mountains slip into the sea. In Trinity Bay, while a whale spouted to starboard, we came alongside a fisherman hauling up net and cleaning cod. He offered us a bag overflowing with fillets and, with the waive of a hand, made it clear he wouldn’t accept payment.

Cod fishermen are a generous bunch

As we motored into a protected, hidden bay, the remains of a long-abandoned village came into view. Bonnie told us, “This place is known as Ireland’s Eye. On the other side of the island is a spot called Black Duck Cove. That’s where my dad lived until he was 11years old.  In the mid 50’s the government began a resettlement program to get people who lived on remote islands to move to the mainland where there would be better access to services like hospitals and schools.”

In some respects it was forced relocation. Many people, rather than abandon their homes, floated their lodgings to the mainland communities. “The old place on Ireland’s Eye was left behind but my grandfather floated a house from Pope’s Harbour to New Bonaventure in August 1965. It was a saltbox style, with the porch and bathroom added later.”

Life was hard on The Rock 50 years ago.

Skipper Bob and the crew

Time flies when you’re playing on the ocean. It was after 2pm when Bob idled the boat back into the marina. We bid a hasty thank-you and adieu and raced for Terra Nova. When we arrived at the campground it was getting dark. All sites were vacant save one. Bev and Burkey were just breaking camp, headed back to Clarenville.

“We are so sorry,” I apologized. “No problem,” said Bev. “You said you were coming for scoff so I knew you’d be here. I did up a couple of plates. They’re still warm.”

A traditional Newfoundland Jiggs dinner consists of turkey, dressing, gravy, bread pudding, carrots, turnip, cabbage, mashed potatoes, pease pudding, figgy duff – and boiled salt beef. For dessert Barb likes to do blueberry crumble and partridgeberry cake topped with hot vanilla sauce. Simple really. And easy to whip up, especially from the cramped confines of your trailer, in a campground, in the cold. Each platter held enough food for three Jiggs dinners. Burkey laughed and told us that a Newfoundlander’s idea of fine dining is a full plate. I offered him two fresh cod fillets and, although it was a little like carrying coals to Newcastle, he graciously accepted.

Florence and I were the only campers in Terra Nova that night. As they drove away Burkey said, “No sense you buying firewood, there’s plenty left.” Bev waived goodbye and they rolled out of our lives.

I looked at the overflowing feast, loosed my belt and dug in.

Next time: St John’s and the Irish Loop

Gerry Feehan is an award-winning travel writer and photographer. He lives in Kimberley, BC.

Gerry Feehan is an award-winning travel writer and photographer. He and his wife Florence live in Kimberley, BC!

Thanks to Kennedy Wealth Management for sponsoring this series.  Click on the ads and learn more about this long-term local business.