Kyle Marshall is a man of many podcasts, three of which are on the Alberta Podcast Network, and all of which reveal different facets of this talented fellow.

Assumptions, which has the longest tenure, features a respectful conversation between Marshall, an atheist, and his friend Daniel Melvill Jones, a Christian. As Marshall says, they “choose to listen and not yell,” even though their world views are very different.

Creative Block grew out of Marshall’s business, Media Lab YYC, a central hub for digital creation in Calgary. He interviews artists and creative entrepreneurs about where they’ve been, what they’re doing now, and where they want to be in the future.

Putting It Together is Marshall’s passion project, in which he explores the entire body of work of Broadway composer Stephen Sondheim, show by show and song by song. It’s the kind of show he wanted to listen to, and when he couldn’t find it, he made it himself.

Let’s learn a little more about the Renaissance man behind these three podcasts:

A. With Assumptions, the topics can be heavy, but there is a lightness to it. Laughing happens often.

On Creative Block, I have a genuine curiosity and am not above asking “stupid” questions so that I can better understand people. Also other people’s stories are fascinating in beautiful and unexpected ways.

Putting It Together gets into the history of shows, why certain words and phrases were used, and then why that impacts the guest that I have on to discuss a song.

Q. What is the most interesting comment you’ve received from a listener?

A. From an Assumptions listener: “After two seasons, I feel like I know you both. So, I’m sorry for not introducing myself sooner. I’m shy about meeting my favorite authors and speakers since I don’t want to ruin the illusion of a two-way relationship that I know we don’t have.”

Q. How did you meet your co-host?

A. Creative Block and Putting It Together are solo efforts, but for Assumptions, Daniel and I were co-workers… We then, with another mutual friend, began a movie night where three guys would watch artsy movies. The conversations we would have after those viewings blossomed into what is now Assumptions.

Q. If you could have any guest on your show, who would you ask and why?

A. For Assumptions, the Pope or the Dalai Lama would be fun to have. Not sure if they do many podcasts, though. Also podcaster Dylan Marron or theologian Timothy Keller.

On Creative Block, a YouTuber I’m very fond of is Andrew Huang. I’d love to talk with Mark Zuckerberg just to pick his brain and also ask him why he chose to ruin North America.

For Putting It Together, I mean, Stephen Sondheim himself would be a pretty good get. I’d also love the chance to speak to Patti Lupone, Bernadette Peters, or Angela Lansbury. All of them have been in multiple Sondheim shows and I think they would have great insights.

Q. Do you have any unusual hobbies or talents that may surprise your listeners?

Q. Why do you think people enjoy podcasts?

A. Roger Ebert wrote that the best of movies were empathy machines. I think the same can be said about podcasts, only they can be more powerful…. With podcasts, you need to use your imagination for what they are talking about, and you start to gain a relationship with the host or hosts. It’s a medium that has a communal feeling even though you are listening to it (mostly) by yourself.

Q. What has been your favourite episode so far?

A. My favourite Assumptions episode is I’m Going to Die Alone (which is part of Season 2 on love and relationships).

My favourite Creative Block so far has been the very first, with Tony Grimes. It totally changed my perception of what the show was going to be. I guess that’s what happens when you discover your guest’s dad was a clown.

My favourite episode of Putting It Together is I Feel Pretty. My guest was a high school drama teacher who put on West Side Story last year. She brought on two of her students and they completely surprised me — they were engaged, thoughtful, and showed great empathy for the characters and their teacher. I then made it sound a bit more like a audio documentary by getting sounds of the school, and recording a bit of a rehearsal that I could layer into my intro.

Each week, Todayville introduces you to members of the Alberta Podcast Network, so you can invite even more Alberta-made podcasts into your ears! You can find Putting It Together, Creative Block, Assumptions and dozens of other shows at albertapodcastnetwork.com.

The Alberta Podcast Network, powered by ATB, is on a mission to:
Help Alberta-based podcasters create podcasts of high quality and reach larger audiences;
Foster connections among Alberta-based podcasters;
Provide a powerful marketing opportunity for local businesses and organizations.
Alberta Podcast Network Ltd. is pursuing this mission with funding from ATB Financial and support from other sponsors.

Nothing stops the Loyal Company of the River Valley

Have some fun “re-casting” movies with REPODCASTING

If you’re interested in looking after yourself a little better — and who isn’t? — Healthy Lifestyle Design provides an easy and pleasant step in the right direction.

This is a podcast featuring Janet and Pamella Heikel, a mother and daughter who believe “it takes only a single step to make a positive change in your life: body, mind, and soul.”

Every two weeks, they have frank, intergenerational conversations about health and wellness, grounded in their own experiences. They also offer tips and suggestions, and the episodes often end with a few minutes of guided meditation, to send you into the rest of your day in a more relaxed frame of mind.

Each episode features not only useful insights, but also just the pleasure of hearing two people with a deep love and respect for each other.

Let’s learn a little more about the women of Healthy Lifestyle Design:

A. Perhaps inspiration, feeling connected to a community, solutions to their health and wellness challenges, a different point of view.

Q. If you could have any guest on your show, who would you want?

A. Janet would want Oprah for sure, just to have the chance to talk to her about how they both are very determined women who don’t let anything hold them back! Pamella would want Peter Rollins. He is a co-host of The Fundamentalists podcast and a modern-day philosopher from Ireland. We would talk about God, religion, and the human condition, while sipping gin.

Q.What podcasts do you listen to?

A. Rob Bell’s The RobCast; You Made It Weird with Pete Holmes; The Fundamentalists; Armchair Expert; Bliss and Grit; Conversation with Alanis Morissette; SuperSoul Conversations; Serial; Under the Skin with Russell Brand; Move Your DNA; The Living Experiment.

Q. Do you have any unusual hobbies or talents?

A. Pamella is a poet (something she doesn’t always talk about but would define herself as solely). Janet is ambidextrous.

Q. Write your own epitaph — what would it say?

A. Pamella: I loved and lived deeply and died passionately.

Q. What has been your favourite episode and why?

A. Episode 75, Samskara: We got a lot of traction with this topic from listeners. We talked about what this word/idea is and how it shows up in our life. It finds its way into almost all of our episodes. The idea of repeating habits and patterns; stored energy; clinging to life that is always changing. It was a great conversation.

Over the next several weeks, Todayville will introduce you to members of the Alberta Podcast Network, so you can invite even more Alberta-made podcasts into your ears! You can find Healthy Lifestyle Design and dozens of other shows at albertapodcastnetwork.com.

The Alberta Podcast Network, powered by ATB, is on a mission to:

Alberta Podcast Network Ltd. is pursuing this mission with funding from ATB Financial and support from other sponsors.

Live your best life with help from ‘Girl Tries Life’

If you’re looking for advice and inspiration from someone who walks her talk, look no further than Girl Tries Life.

Host Victoria Smith provides women with “the tools, strategies and inspiration to live their best lives.” And she knows whereof she speaks.

Her podcast recently passed the 100-episode mark, which is all the more impressive when you know she had a toddler son when she started, and gave birth to her daughter last year. Plus she has spun her work off into a business, called Stress Less Ladies, which has been accepted into the ATB X incubator.

Girl Tries Life alternates between interviews with women who are living incredible lives and continue to strive for more, and coaching episodes to tackle specific challenges that Smith has observed and sometimes lived through herself.

Let’s learn a little more about empathetic, knowledgeable host of this show:

A. Inspiration from the badass women that I interview. And every coaching episode provides a tangible tool, skill or mindset shift to help them with their daily challenges.

Q. If you could have any guest on your show, who would you want and why?

A. Catherine Reitman, the creator of Working Moms. It’s an incredibly funny show, she’s whip-smart, and I think her perspective on how women can move up in the workforce even when their resumes don’t reflect it would be incredible.

Q. What podcasts do you listen to?

Q. Do you have any unusual hobbies or talents?

A. Does podcasting count? Also, avoiding piles of Lego and other small sharp toys my son leaves on the floor.

Q. Write your own epitaph — what would it say?

A. It’s not about the achievements, it’s about putting in the effort and enjoying the journey.

Q. What has been your favourite episode and why?

A. So hard to choose! Probably one of my favourites would have been when I interviewed Bryony Gordon to talk about mental health. She is someone who I have so respected, and is so well known in her field. I’d say she was my “big fish” of interviewees.

Over the next several weeks, Todayville will introduce you to members of the Alberta Podcast Network, so you can invite even more Alberta-made podcasts into your ears! You can find Girl Tries Life and dozens of other shows at albertapodcastnetwork.com.

The Alberta Podcast Network, powered by ATB, is on a mission to:

Alberta Podcast Network Ltd. is pursuing this mission with funding from ATB Financial and support from other sponsors. 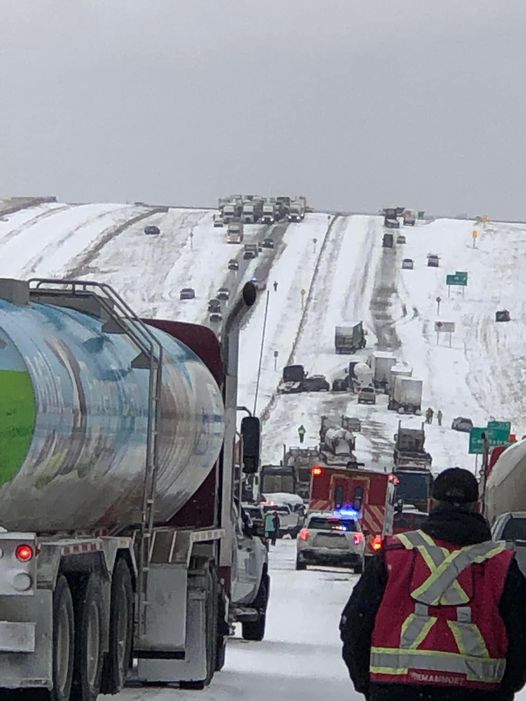 Terrible day on the highways in Central Alberta 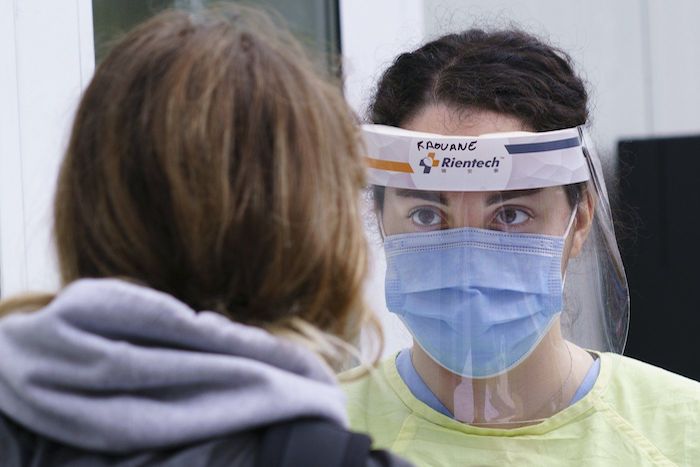