NEW YORK — A hamburger a week, but no more — that’s about as much red meat people should eat to do what’s best for their health and the planet, according to a report seeking to overhaul the world’s diet.

Eggs should be limited to fewer than about four a week, the report says. Dairy foods should be about a serving a day, or less.

The report from a panel of nutrition, agriculture and environmental experts recommends a plant-based diet, based on previously published studies that have linked red meat to increased risk of health problems. It also comes amid recent studies of how eating habits affect the environment. Producing red meat takes up land and feed to raise cattle, which also emit the greenhouse gas methane.

John Ioannidis, chair of disease prevention at Stanford University, said he welcomed the growing attention to how diets affect the environment, but that the report’s recommendations do not reflect the level of scientific uncertainties around nutrition and health.

“The evidence is not as strong as it seems to be,” Ioannidis said.

The report was organized by EAT, a Stockholm-based non-profit seeking to improve the food system, and published Wednesday by the medical journal Lancet. The panel of experts who wrote it says a “Great Food Transformation” is urgently needed by 2050, and that the optimal diet they outline is flexible enough to accommodate food cultures around the world.

Overall, the diet encourages whole grains, beans, fruits and most vegetables, and says to limit added sugars, refined grains such as white rice and starches like potatoes and cassava. It says red meat consumption on average needs to be slashed by half globally, though the necessary changes vary by region and reductions would need to be more dramatic in richer countries like the United States.

Convincing people to limit meat, cheese and eggs won’t be easy, however, particularly in places where those foods are a notable part of culture.

In Sao Paulo, Brazil, systems analyst Cleberson Bernardes said as he was leaving a barbecue restaurant that limiting himself to just one serving of red meat a week would be “ridiculous.” In Berlin, Germany, craftsman Erik Langguth said there are better ways to reduce greenhouse gas emissions, and dismissed the suggestion that the world needs to cut back on meat.

“If it hasn’t got meat, it’s not a proper meal,” said Langguth, who is from a region known for its bratwurst sausages.

Before even factoring in the environmental implications, the report sought to sketch out what the healthiest diet for people would look like, said Walter Willett, one of its authors and a nutrition researcher at Harvard University. While eggs are no longer thought to increase risk of heart disease, Willett said the report recommends limiting them because studies indicate a breakfast of whole grains, nuts and fruit would be healthier.

He said everybody doesn’t need to become a vegan, and that many are already limiting how much meat they eat.

“Think of it like lobster — something that I really like, but have a few times a year,” Willett said.

Advice to limit red meat is not new, and is tied to its saturated fat content, which is also found in cheese, milk, nuts and packaged foods with coconut and palm kernel oils. The report notes most evidence on diet and health is from Europe and the United States. In Asian countries, a large analysis found eating poultry and red meat (mostly pork) was associated with improved lifespans. That might be in part because people might eat smaller amounts of meat in those countries, the report says.

Ioannidis of Stanford noted nutrition research is often based on observational links between diet and health, and that some past associations have not been validated. Dietary cholesterol, for example, is no longer believed to be strongly linked to blood cholesterol.

The meat and dairy industries also dispute the report’s recommendations, saying their products deliver important nutrients and can be part of healthy diets.

Andrew Mente, a nutrition epidemiology researcher at McMaster University, urged caution before making widespread dietary recommendations, which he said could have unintended consequences.

Still, the EAT-Lancet report’s authors say the overall body of evidence strongly supports reducing red meat for optimal health and shifting toward plant-based diets. They note the recommendations are compatible with the U.S. dietary guidelines, which say to limit saturated fat to 10 per cent of calories.

While people in some poorer counties may benefit from getting more of the nutrients in meat and dairy products, the report says they shouldn’t follow the path of richer countries in how much of those foods they eat in coming years.

Though estimates vary, a report by the United Nations said livestock is responsible for about 15 per cent of the world’s gas emissions that warm the climate.

Robbie Andrew, a senior researcher at CICERO Center for International Climate Research in Norway, said farming practices that make animals grow faster and bigger may help limit emissions. But he said cows and other ruminant animals nevertheless produce a lot of methane, a powerful greenhouse gas.

“It’s very difficult to get down these natural emissions that are part of their biology,” Andrew said.

The environmental benefits of giving up red meat depend on what people eat in its place. Chicken and pork produce far fewer emissions than beef, Andrew said, adding that plants in general have among the smallest carbon footprints.

Brent Loken, an author of the EAT-Lancet report, said the report lays out the parameters of an optimal diet, but acknowledged the challenge in figuring out how to work with policy makers, food companies and others in tailoring and implementing it in different regions.

More from this author
International / 4 mins ago 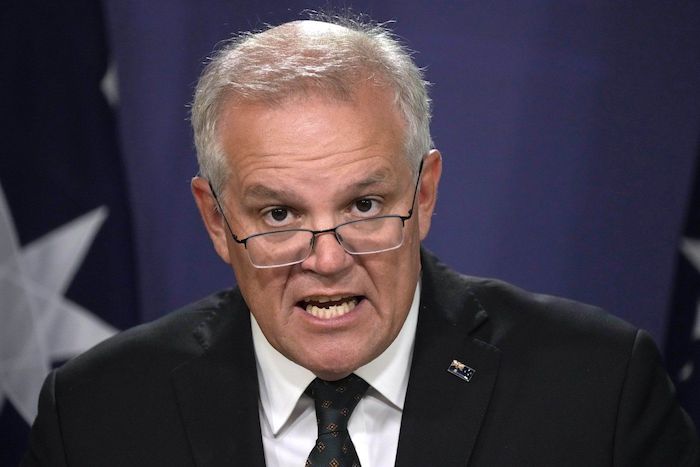 LONDON (AP) — Former British Prime Minister Liz Truss will join the former leaders of Australia and Belgium at a conference in Tokyo later this month to call for a tougher international approach to China.

The Inter-Parliamentary Alliance on China, an international group of lawmakers concerned about how democratic countries approach Beijing, said Friday that Truss will speak alongside former Australian Prime Minister Scott Morrison at the Feb. 17 event in the Japanese Diet. Former Belgian Prime Minister Guy Verhofstadt, who is also a European Parliament lawmaker, will attend as well.

Conference organizers hope the event would help spur more coordinated diplomacy on threats raised by China ahead of the next Group of Seven richest democratic countries’ summit, scheduled in May in Hiroshima.

Truss is expected to address growing concerns over Beijing’s threats to Taiwan, which China claims as its own territory. Morrison will call for more targeted sanctions against Chinese officials for serious human rights violations, while Verhofstadt will speak about the European Union’s role in maintaining international rules under pressure from Beijing.

“The scale of the challenge posed by the People’s Republic of China is such that we all need to rise above our differences and come together to defend our fundamental values and interests,” Verhofstadt said in a statement.

The three former leaders will address about 40 Japanese lawmakers as well as legislators from the U.K., Canada, the European Union and Taiwan. Senior Japanese ministers are also expected to attend.

Truss has kept out of the public eye since she quit as Conservative British prime minister in October after just 45 days in office, following an ill-conceived economic plan she unveiled that triggered a political and financial crisis.

As foreign secretary she was outspoken in criticizing China, advocating stronger ties between democracies so they can counter China and Russia more effectively. She had suggested that the U.K. should work with its allies to ensure Taiwan could defend itself against Chinese military aggression.

Her successor, current British Prime Minister Rishi Sunak, has rejected “grand rhetoric” against China and wants a more “pragmatic” relationship with Beijing. While he has called China’s growing authoritarianism a “systemic challenge,” he stopped short of describing China as a threat to British security and said the U.K. and its allies needed to engage Beijing in diplomacy.

Western countries are rethinking their relationship with Beijing after Russia’s invasion of Ukraine, but the U.S., Britain and the EU’s 27 member states have disagreed with each other over how to approach an increasingly assertive China.

In November, German Chancellor Olaf Scholz was criticized by both his European partners and his own coalition government when he led a delegation of senior business leaders to visit Beijing.

Critics said the bilateral visit undermined unity among EU leaders, who discussed reducing their heavy economic dependence on China during a Brussels summit in October. While Scholz said there should be recognition that China was increasingly a competitor and systemic rival, he also warned against decoupling ties.