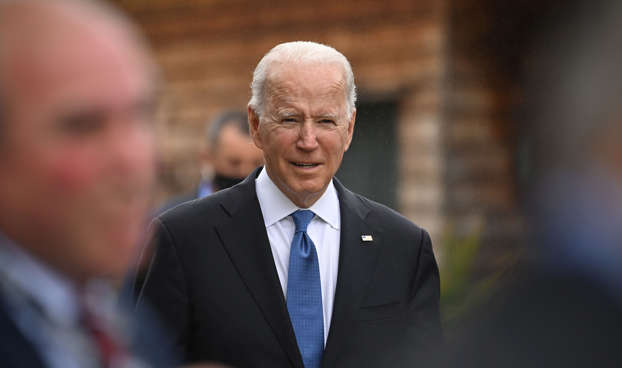 CARBIS BAY, England (AP) — The United States plans to push democratic allies on Saturday to publicly call out China for forced labor practices as the Group of Seven leaders gather at a summit where they will also unveil an infrastructure plan meant to compete with Beijing’s efforts in the developing world.

The provocative proposal is part of President Joe Biden’s escalating campaign to get fellow democratic leaders to present a more unified front to compete economically with China in the century ahead, according to two senior administration officials who briefed reporters on the condition of anonymity because they were not authorized to discuss the plans publicly.

The officials said Biden wanted G-7 leaders to speak out in a single voice against forced labor practices targeting Uyghur Muslims and other ethnic minorities. Biden hopes the denunciation will be part of the joint communique released at the summit’s end, but some European allies have been reluctant to so forcefully split with Beijing. It may not be clear until the three-day summit ends on Sunday whether the leaders will take that step.

The wealthy nations’ leaders were all smiles Friday as their host, British Prime Minister Boris Johnson, welcomed them to the summit on the freshly raked sand of Carbis Bay in southwest England for their first gathering since 2019.

Last year’s gathering was canceled because of COVID-19, and recovery from the pandemic is dominating this year’s discussions, with members of the wealthy democracies’ club expected to commit to sharing at least 1 billion vaccine shots with struggling countries.

China also loomed large over the meeting on the craggy coast of Cornwall. Biden’s proposed critique of China’s labor practices was to be raised as the allies unveil an infrastructure proposal dubbed “Build Back Better for the World,” a name echoing the American president’s campaign slogan.

The plan calls for spending hundreds of billions of dollars in collaboration with the private sector. It’s designed to compete with China’s trillion-dollar “Belt and Road Initiative,” which has launched a network of projects and maritime lanes that already snake around large portions of the world, primarily Asia and Africa. Critics say the projects often create massive debt and expose nations to undue influence by Beijing.

Britain also wants the world’s democracies to become less reliant on economic giant China. The U.K. government says Saturday’s discussions will tackle “how we can shape the global system to deliver for our people in support of our values,” including by diversifying supply chains that currently heavily depend on China.

Not every European power has viewed China in as harsh a light as Biden, who has painted the rivalry with the techno-security state as the defining competition for the 21st century. But there are some signs that Europe is willing to put greater scrutiny on Beijing.

Weeks before Biden took office last year, the European Commission announced it had come to terms with Beijing on the Comprehensive Agreement on Investment, a deal meant to provide Europe and China greater access to each other’s markets. The Biden administration had hoped to have consultations on the pact.

But the deal has been put on hold, and the European Union in March announced sanctions targeting four Chinese officials involved with human rights abuses in Xinjiang. Beijing responded by imposing sanctions on several members of the European Parliament and other Europeans critical of the Chinese Communist Party.

Biden administration officials see the moment as an opportunity to take concrete action to speak out against China’s reliance on forced labor as an “affront to human dignity.”

While calling out China in the communique wouldn’t create any immediate penalties for Beijing, one senior administration official said the action was meant to send a message that the G-7 was serious about defending human rights and working together to eradicate the use of forced labor.

An estimated 1 million people or more — most of them Uyghurs — have been confined in reeducation camps in China’s western Xinjiang region in recent years, according to researchers. Chinese authorities have been accused of imposing forced labor, systematic forced birth control, torture and separating children from incarcerated parents.

Beijing rejects allegations that it is committing crimes.

The leaders of the G-7 — which also includes Canada, France, Germany, Italy and Japan — also hope the meeting at the seaside resort will energize the global economy.

Johnson on Friday opened three days of talks by warning that world leaders must not repeat errors of the past 18 months — or those made during the recovery from the 2008 global financial crisis. If not, he said the pandemic “risks being a lasting scar” that entrenched inequalities.

He said the G-7 will announce health measures aimed at reducing the chances of another pandemic. The “Carbis Bay Declaration” will aim for a 100-day goal to develop vaccines, treatments and diagnostics for future diseases and to bolster surveillance for new illnesses.

Johnson said the goal of the measures was “to make sure that never again will we be caught unawares.”

Brexit will also cast a shadow on the summit Saturday, as Johnson meets separately with European leaders including German Chancellor Angela Merkel and French President Emmanuel Macron amid tensions over Britain’s implementation of U.K.-EU divorce terms.

Macron will also hold talks with Biden — a meeting between allies who recalibrated their relationship during the four years of President Donald Trump’s “America first” foreign policy.

Macron’s preference for multilateralism was out of step with Trump’s isolationist tendencies. But the Trump era was often framed by Macron as a clarifying moment — one in which Europe had to step forward as America drifted away from alliances and toward Trumpism.

Biden ends the trip Wednesday with summit in Geneva with Russia’s Vladimir Putin. The White House announced Saturday that the leaders will not hold a joint news conference after meeting, removing the opportunity for comparisons to the availability that followed Trump and Putin’s 2018 Helsinki summit in which Trump sided with Moscow over his own intelligence agencies.

Aides have suggested that the U.S. did not want to elevate Putin further by having the two men appear together in such a format. Others have expressed concern that Putin could try to score points on Biden, 78, who will be in the final hours of a grueling eight-day European trip.

Putin, in an interview with NBC News, portions of which aired Friday, said the U.S.-Russia relationship had “deteriorated to its lowest point in recent years.”

He added that while Trump was a “talented” and “colorful” person, Biden was a “career man” in politics, which has “some advantages, some disadvantages, but there will not be any impulse-based movements” by the U.S. president.

To cap the day Friday, Queen Elizabeth II — Britain’s biggest global star — traveled from Windsor Castle near London for a reception with the G-7 leaders and their spouses at the Eden Project, a futuristic botanical garden housed inside domes that features the world’s largest indoor rainforest.

Senior royals — including heir to the throne Prince Charles, his son Prince William and William’s wife, Kate — joined the leaders for the reception and a dinner of roasted turbot, Cornish new potatoes and greens with wild garlic pesto, cooked by a local chef.

The choice of an ecologically themed venue was deliberate. Climate change is also a top issue on the agenda, and hundreds of protesters gathered in Cornwall to urge the leaders to act, some dressed as sea creatures, including jellyfish. Demonstrators deployed a barge off the coast with two large inflatable figures depicting Biden and Johnson on board.

TOKYO — Canada has its first rowing medal at the Tokyo Olympics.

Victoria’s Caileigh Filmer and Hillary Janssens of Surrey, B.C., took bronze on Thursday in the women’s pair with a time of six minutes 52.10 seconds.

The 2018 world champions finished behind the gold-medal winning duo of Grace Prendergast and Kerri Gowler of New Zealand (6:50.19) and the Russian Olympic Committee’s Vasilisa Stepanova and Elena Oriabinskaia (6:51.45).

Conlin McCabe of Brockville, Ont., and Kai Langerfeld of North Vancouver, B.C., were the other Canadian rowers in a final Thursday, finishing fourth in the men’s pair on the 2,000-metre course at Sea Forest Waterway.

Canada’s women’s eight will race for a gold Friday.

The country’s rowers are looking to rebound after a disastrous showing at the 2016 Rio Games that saw the program secure just one medal.

The Canadians qualified 10 boats for Tokyo — the most since the 1996 Olympics in Atlanta — and have a gender-neutral team for the first time in their history.