TORONTO — Ontario’s highest court ruled Wednesday that doctors in the province must give referrals for medical services that clash with their religious beliefs, calling it a compromise that balances the rights of physicians and the interests of patients.

In a unanimous ruling, a three-judge panel dismissed an appeal seeking to overturn a divisional court decision that upheld the requirement for an “effective referral,” an effort to connect patients with another, willing health-care provider.

The requirement is part of a set of policies issued in 2016 by the College of Physicians and Surgeons of Ontario to address issues surrounding, among other things, assisted dying, contraception and abortion.

“The issues raised in this proceeding present difficult choices for religious physicians who object to the policies, but they do have choices,” the appeal court wrote.

The policies “represent a compromise,” the court wrote.

“They strike a reasonable balance between patients’ interests and physicians’ Charter-protected religious freedom. They are reasonable limits prescribed by law that are demonstrably justified in a free and democratic society.”

The college, which regulates doctors in Ontario, called the ruling a victory for patients.

“The court has recognized the importance of ensuring patients get access to the care they need,” said Dr. Nancy Whitmore, its registrar and CEO. “Our effective referral policy ensures equitable access to health care, particularly on the part of the more vulnerable members of our society while respecting the rights of all of those involved.”

Those behind the appeal expressed their disappointment at the outcome of the case, saying the decision will put some physicians in an impossible position.

“Ultimately it is patient care that suffers, as our doctors will retire early, relocate, or change fields,” said Dr. Ryan Wilson, president of Canadian Physicians for Life, one of three professional organizations involved in the appeal, along with five individual doctors.

“For many, their religious and conscience rights are being violated and they won’t be able to practise medicine in Ontario.”

The appeal challenged a ruling last year by the divisional court, which found that while the referral requirement does infringe on doctors’ religious freedom, the benefits to the public outweigh the cost to physicians.

The lower court noted an effective referral is not as involved as a formal one, in which a doctor is required to provide a letter and arrange an appointment with another physician. It said doctors can ask staff to handle the effective referral, or choose to specialize in a type of medicine where these issues are less frequent.

In the appeal, the group of doctors argued the ruling was unreasonable because it gave more weight to an assumed problem with access to health care than to a real infringement of doctors’ rights.

The group — which includes the Christian Medical and Dental Society of Canada, the Canadian Federation of Catholic Physicians’ Societies and Canadian Physicians for Life — said there is no evidence that patients would be harmed by not receiving a referral.

The group also introduced new evidence in the appeal, arguing Ontario’s Care Co-ordination Service meant to help navigate the assisted dying process was now accessible to the public rather than only physicians and could thus replace an effective referral.

The appeal court agreed with the divisional court that “as a matter of logic and common sense” the requirement for an effective referral promotes equitable access to care, particularly for vulnerable patients.

It also found that the self-referral method proposed by the doctors’ group would not meet the needs of patients seeking “the most intimate and urgent medical advice and care.”

“It is impossible to conceive of more private, emotional or challenging issues for any patient,” the appeal court wrote. “Given the importance of family physicians as ‘gatekeepers’ and ‘patient navigators’ in the health-care system, there is compelling evidence that patients will suffer harm in the absence of an effective referral.”

While the doctors’ group argued the requirement will force physicians to leave the province or cease practising medicine, which would harm the public, the appeal court noted no evidence to that effect was presented.

Changing the scope of their practice may require sacrifices from physicians, the appeal court found. However, “the appellants have no common law, proprietary or constitutional right to practise medicine,” it said.

The college had brought new evidence on appeal suggesting doctors could change or narrow the scope of their practice without resorting to retraining. Its expert witness said some areas of medicine are unlikely to encounter requests for assisted death or reproductive health issues, including hair restoration, sport and exercise medicine, hernia repair and aviation examinations.

Freeland leaves D.C. with no tariff deal, despite early optimism from U.S. 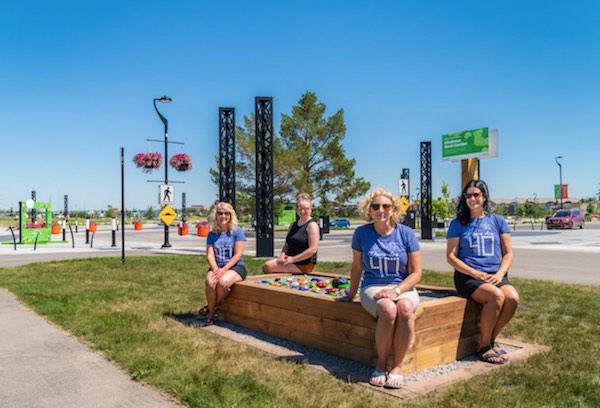 SPARC Red Deer, is pleased to announce a new “Paint the Town Positive” activity designed to promote positive messaging by creating a kindness rock garden.  We have partnered with Capstone to start the rock garden beside the Riverwalk in Capstone, adjacent to the fountain in Canada 150 Square, at the end of Alexander Way. We encourage Red Deerians to participate by adding their own colourful positive rocks. The purpose is to spread kindness and encourage further involvement by our community.  We’d love to see families come together to paint rocks and then, while out for a walk or bike ride, add their kindness rocks to the site.  We encourage parents to promote these positive behaviours in their children, which in turn, helps their kids grow up great!

Capstone – Red Deer’s only multi-family, riverside community – is excited to partner with SPARC Red Deer on the Kindness Rocks project! Capstone is a vibrant, healthy, inclusive neighbourhood that’s connected to new ideas, explores fresh ways of living, and is designed for life in Red Deer today and in the future.  The Kindness Rocks garden is just one of many elements in Capstone that favours human connection, and creates a balance between living, working, and culture & recreation.

Help us grow this rock garden to see how big and positive it can get!  Come back to visit and add more rocks throughout the summer.

What is Paint the Town Positive? It is youth-driven chapter of SPARC Red Deer. The idea is for youth to give back and spread kindness in the community through various projects and initiatives that are designed and created by them. This is to engage youth in positive activities and also to allow our community to see youth in positive ways which builds assets! Youth can also use their involvement to build up their volunteer experience for future resumes. Previous activities include youth donating and distributing warm winter wear in our City Hall Park, designing kindness rocks that were distributed within the community, and leaving bookmarks with positive messages throughout the community.

SPARC Red Deer is a local non-profit coalition designed to promote and educate community members and families about the ’40 Developmental Assets”. The 40 Developmental Assets, developed by the Search Institute, are research-proven life experiences or building blocks which all children need to grow up healthy, caring, and responsible. Research shows that the higher number of these assets a young person has, the more likely they are to thrive and to engage in positive behaviours, and avoid risky behaviours.