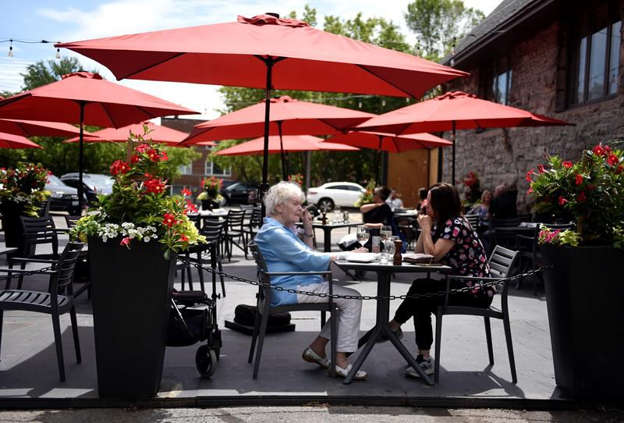 As COVID-19 vaccination rates increase and case numbers drop across the country, the provinces and territories have begun releasing the reopening plans for businesses, events and recreational facilities.

Most of the plans are based on each jurisdiction reaching vaccination targets at certain dates, while also keeping the number of cases and hospitalizations down.

Here’s a look at what reopening plans look like across the country:

Newfoundland and Labrador’s chief medical officer of health says it appears the third wave of COVID-19 is subsiding across Atlantic Canada ahead of a resumption of regional travel next week.

Dr. Janice Fitzgerald says the province now has 26 active cases ahead of its June 23 target to permit travellers from the other three Atlantic provinces.

She says people entering the province won’t have to self-isolate, but will have to fill out a travel form before arrival and show identification at their point of entry to prove they are a resident of the Atlantic region.

The province’s reopening plan begins with a transition period during which some health restrictions, like limits on gatherings, will loosen.

Requirements for testing and self-isolation lift entirely for fully vaccinated Canadian travellers on Canada Day, while those requirements ease over the next few months for travellers with just one dose of a COVID-19 vaccine.

If case counts, hospitalization and vaccination targets are met, the province expects to reopen dance floors as early as Aug. 15, and lift capacity restrictions on businesses, restaurants and lounges while maintaining physical distancing between tables.

As early as Sept. 15, mask requirements for indoor public spaces would be reviewed.

Nova Scotia has moved into Phase 2 of its five-step reopening plan, which allows such things as indoor dining at restaurants and bars, a 50 per cent customer capacity for retail stores and increased gathering limits.

The province has allowed all public and private schools to reopen. A limit of 10 people gathering informally indoors is in place, and up to 25 people are allowed to gather informally outdoors without social distancing.

Festivals and special events may take place at 25 per cent of the venue’s capacity with a maximum of 50 people indoors and up to 75 people outdoors with social distancing.

Indoor and outdoor restaurant dining is allowed with two metres between tables and a maximum of 10 people at each table. Restaurants can only serve dine-in customers until 11 p.m. and must close by 12 a.m., however take-out, delivery and drive-thru service can still be offered after 12 a.m.

New Brunswick has moved into Phase 2 of its reopening plan, having reached its goal of having 20 per cent of people 65 or older vaccinated with two doses of a COVID vaccine.

Premier Blaine Higgs says the change opens travel without the need to isolate to all of Nova Scotia after opening to P.E.I. and Newfoundland and Labrador on Wednesday.

Travellers from elsewhere in Canada who’ve had at least one dose of a COVID-19 vaccine will be allowed into the province without the need to isolate, while those who haven’t had a shot will have to isolate and produce a negative test before being released from quarantine.

Other changes allow restaurants, gyms and salons to operate at full capacity as long as customer contact lists are kept.

In the third phase, the province will lift all COVID-19 restrictions.

The province has allowed personal gatherings to increase so that up to 20 people can get together indoors and outdoors. Restaurants are allowed to have tables of up to 20. Special occasion events like backyard weddings and anniversary parties of up to 50 people hosted by individuals are permitted with a reviewed operational plan.

The province projects that on July 18, its non-medical mask requirement will ease, and organized gatherings hosted by a business or other organization will be permitted with groups of up to 200 people outdoors or 100 people indoors.

On Sept. 12, the province expects physical distancing measures to be eased, as well as allowing personal and organized gatherings to go ahead without limits.

Montreal and several other regions have moved from the orange pandemic alert level to yellow, permitting indoor gatherings with members of another household, the resumption of outdoor team sports and expanded capacity for weddings, funerals and religious services. Bars in yellow zones can also welcome patrons inside at 50 per cent capacity.

Earlier in June, the province permitted gyms and restaurant dining rooms to reopen as the province moved all regions out of the red alert level. Bar patios have reopened and supervised outdoor sports and recreation are allowed in groups of up to 25 people.

The province ended its nightly curfew on May 28 and allowed restaurant patios to open as well as limited outdoor gatherings on private property. It also lifted travel bans between regions.

Quebec has also increased the number of people allowed to attend sporting events and festivals to 3,500.

Ontario is following a three-step reopening plan that will see public health restrictions lift every 21 days based on vaccination rates and other health indicators. Workplaces and public spaces need to follow pandemic guidelines including masking, physical distancing and capacity limits during the reopening plan.

The province’s reopening plan is based on COVID-19 vaccination rates and holiday dates.

If certain vaccination rates are met by those dates, limits will be loosened on gatherings, travel, shopping and dining.

More than 70 per cent of Manitobans 12 and older will have had to receive a first dose — and more than 25 per cent a second one — by Canada Day to hit the first target. If that happens, businesses and other facilities will be able to open at 25 per cent capacity.

Businesses will be allowed to open at half capacity if 75 per cent of people have had one shot and 50 per cent have had a second by the August long weekend.

The final target calls for 80 per cent of the population to have had one shot and 75 per cent to be fully vaccinated by Labour Day in September. In that case, most businesses, services and facilities would be able to open with limited restrictions.

Restaurants and bars must maintain two metres of physical distance between tables or erect a structural barrier between tables if distancing isn’t possible. Tables are limited to six people at a time. Dance floors and buffets remain closed.

Places of worship are allowed up to 30 per cent of their seating capacity or 150 people, whichever is less. And individuals must be separated by two metres, unless they are part of the same extended household.

A maximum of 30 people are allowed to attend gatherings at banquet and conference facilities, which includes wedding and funeral receptions. No food or beverages are allowed.

A maximum of 30 people are allowed in a movie theatre, but staff and customers must be able to maintain two metres of physical distance. The same rule applies to live theatre.

Outdoor social gatherings of up to 20 people are allowed with proper distancing.

Indoor recreation, entertainment and other settings can open at one-third of fire code occupancy. Places of worship can also open to one-third capacity and restaurants are allowed up to six people per table, indoors or outdoors.

Youth activities have resumed with restrictions and outdoor public gatherings, such as concerts and festivals, are allowed with up to 150 people. A work-from-home order has been lifted, but it is still recommended.

All remaining restrictions will lift on July 1 after the province reached its vaccination threshold for the third and final phase of reopening.

There will no longer be limits on weddings, funerals or bans on indoor social gatherings. There will also be no more limits on gyms, sports or fitness activities, no more capacity limits at restaurants, in retail stores or in places of worship.

Anyone with a confirmed case of COVID-19 will still be required to self-isolate and protective measures at continuing care centres may remain.

The overall requirement for masks in public indoor spaces will end, but masks may still be required in some settings.

Seated gatherings of up to 50 people are allowed at banquet halls, movie theatres and theatre performances. High-intensity fitness classes are allowed and bars can serve liquor until midnight.

Indoor faith gatherings are allowed with a maximum of 50 people or up to 10 per cent of a building’s capacity.

Recreational travel within B.C. is allowed, but the province is asking those planning to visit from other provinces to delay those plans until more people have had their vaccines.

The province is testing every positive COVID-19 case for variants of concern and testing, tracking and tracing for each case remains a priority.

Rules for masks and physical distancing remain in place.

Public health orders affecting what is allowed to open vary by community.

Meanwhile in Kinngait and Rankin Inlet, outdoor gatherings are limited to 100 people and those indoors are restricted to a household plus 15 people. Restaurants and bars are allowed to open for regular business at 50 per cent capacity, and there must be a two metre distance between tables, with no more than six people seated or around each table.

Up to 25 people are allowed in a business that is following an approved COVID-19 plan. Households can have up to 10 people with a maximum of five guests from another household.

This report by The Canadian Press was first published June 19, 2021